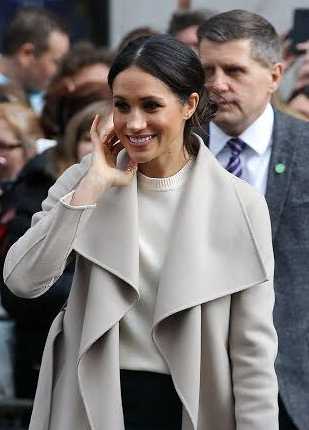 Meghan Markle did not stand with the other members of the royal family on Sunday's Remembrance Day Service, and it inevitably caused the people to speculate that it as a sign of the deepening rift between the royals.

The Duchess of Sussex joined the royal family as they gathered for the Armistice Day in London last Sunday.  Every year, senior members of the Firm gather at the Cenotaph on Whitehall to pay tribute to the day that marks the end if the World War I. A two-minute silence is given to pay tribute to those who have lost their lives in the wars.

During the solemn ceremony, Queen Elizabeth II, Kate Middleton and Camilla, Duchess of Cornwall stood together at one balcony to oversee the Cenotaph war memorial. Markle, however, stood on a separate balcony with Sophie, Countess of Wessex, and Sir Timothy Laurence, Princess Anne's husband.

The clear separation led people into thinking that it was a tell-tale sign of the serious issue within the royal family. However, there is actually a more practical reason why Markle did not stand in the same balcony as Her Majesty.

"The balconies overlooking Whitehall occupied by the Royal Family are very small," Royal expert Richard Fitzwilliam has previously explained to The Sun.

Considering the size of each window, it was nearly impossible for more than three women to fit in. Hence, it was for safety purposes and not for anything else that Markle had to be separated from the Queen.

Last year, Markle did not join the other members of the royal family as well. Instead, she stood by German President Frank-Walter Steinmeier's wife, Elke Budenbender.

On this, Fitzwilliam said: "To be on a balcony with the wife of the German President, Frau Elke Budenbender as Meghan was obviously had a unique cachet. This historic occasion was the first time a German President or representative of Germany was involved in the ceremony and this was a highly significant moment of reconciliation."

On the other hand, a palace source also told People that there is no one laying out and telling Meghan where to stand.

However, this arrangement seems to be nothing but a manifestation of the royal family's order of precedence. Needless to say, Queen Elizabeth will always be at the center front. Prince Charles sits beside her, with him being the heir to the throne. Prince William, being next in line to his father, sits in close proximity to the Queen together with his wife, Kate. Prince Harry is sixth-in-line, which explains why he is seated further with his wife.