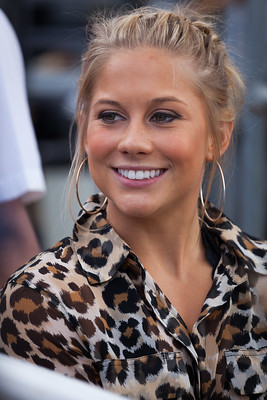 The social stigma surrounding women giving birth via C-section has to stop. It does not make a woman any less of a mother if she cannot give birth sans surgery.

Johnson previously had a heartbreaking miscarriage. The birth of their daughter was even more special to the couple.

However, her birthing plan was not as expected. Shawn opened up on Instagram about how she really felt about getting a C-section. After all, she dreamed of a normal delivery.

The "Dancing with the Stars" alum documented her birthing story on her YouTube vlog: The East Family. After 14 hours in labor, she stubbornly accepted an epidural.

The first-time mom did not want medication or intervention at all. But after 22 hours in labor, her doctors announced the inevitable.

"When they told me I needed an epidural, I felt guilty. But with C-section, I felt like I had failed," Shawn wrote on Instagram.

Many of her mom-followers showered the new mother with encouragement. Women who had difficult birthing stories bravely opened up, too.

Johnson finally admitted that now she could not care less. She realized the important thing was that her sweet girl arrived safely.

View this post on Instagram
22 hours of labor to end in a c section. I went in with such a stubborn mindset of thinking the only way I could bring our baby into the world was naturally. No meds no intervention. At 14 hours when I chose to get an epidural I felt guilty. At 22 hours when we were told I had to get a c section I felt like I had failed. But after holding our sweet girl in my arms and being told everything went well and she had made it to us safely I could have cared less. My/our world no longer has anything to do with us but everything to do with her. It’s all for her and I will forever do anything for this girl that I love more than I ever could imagine. A love no one can ever prepare you for. @andrewdeast I meant it in the hospital when I said you will forever be my number one but she will now forever be OUR number one together. Thank you to the incredible doctors and nurses who brought our baby girl into the world safely and to the best husband/daddy in the world for being there every step of the way. @tealephotography A post shared by  Shawn Johnson East (@shawnjohnson) on Nov 7, 2019 at 12:44pm PST

Kate Winslet kept her C-section a secret for years. She reportedly went through great pains to cover up the fact that she did not give birth naturally.

The "Titanic" star revealed that she had an emergency C-section with her firstborn. The experience reportedly traumatized her. Like Johnson, Winslet felt she was a complete failure.

"My whole life people tell me my hips are great for childbearing," Kate said, as she was made to believe women who cannot handle childbirth cannot handle anything. When she gave birth naturally to her second child, it was nothing short of triumphant for the actress.

Jennifer Lopez got pregnant around the same time as her sister. Lopez had twins and so was recommended to undergo a C-section. Jen felt bummed that she was unable to give birth the way every other woman does. But when she saw her sister give birth naturally months later, her sad feelings were wiped away.

However, the celebrity mom that got the worst mom-shaming for delivering via C-section would be Victoria Beckham. The Spice Girls' Posh Spice was branded as "too posh to push." Unlike Winslet, Beckham had narrow hips. All her children were delivered this way.

Since Beckham, many more women have been criticized as being too posh to push, but moms slammed their critics saying it is not convenient for a woman to give birth this way.

Whether by choice or not, women should not be made to feel inadequate for giving birth in ways beyond conventional. After all, as Johnson puts it, the most important thing is the baby was delivered safely, healthy and alive.