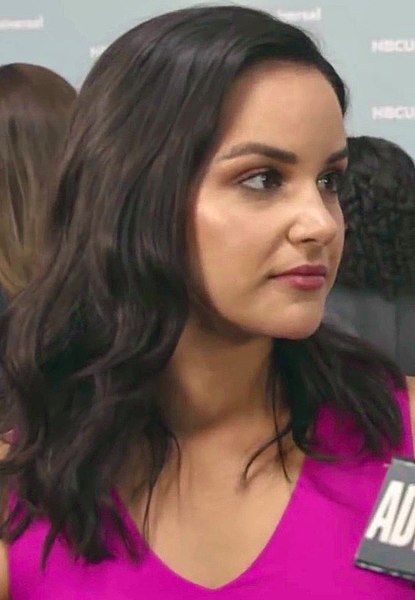 "Brooklyn Nine-Nine" star Melissa Fumero is expecting! However, she admits the pregnancy is more challenging than her first.

Melissa Fumero and husband, Power star David Fumero, are already parents to a three-year-old boy named Enzo. As they excitedly shared the good news about another baby on the way, Melissa unexpectedly shared the challenges of this second pregnancy.

Melissa, 37, took it to Instagram to share about baby number 2. She posted a mirror selfie on Instagram to show off her growing baby bump and captioned the photo, "Oh yeah, I'm hella pregnant!"

View this post on Instagram
Oh yeah, I’m hella pregnant. To be honest, I haven’t felt like posting about it because this pregnancy has been way harder and... I don’t feel that cute? But yesterday I got a really intense massage, an awesome chiropractic adjustment, and my hair feels thicker... so I feel a little bit cute today. #herewegoagain #babyboynumerodos A post shared by  Melissa Fumero (@melissafumero) on Nov 16, 2019 at 6:09pm PST

After that, Melissa opened her heart out and wrote that she previously does not feel like posting anything about her pregnancy. She particularly noted that this second pregnancy is way harder than the first and that she does not feel as confident as before.

However, the day before she posted the photo, Melissa got herself a chiropractic adjustment and an intense massage.

"My hair is thicker and I feel a little cute." she wrote. She used the hashtags #herewegoagain and #babyboynumerodos, revealing the baby's gender.

In an interview with PEOPLE back in 2016, the actress shared her experience filming the |Brooklyn Nine-Nine" while she was pregnant with Enzo. She confessed that it was a challenge because her ankles were all swollen.

With that said, the actress understood why pregnant artists like her would rather take the time off a month before they were due.

"I had to learn it the hard way. I gave birth to Enzo five days after the show packed up," Fumero revealed.

Melissa then said that she admires the actresses who have gone through their pregnancy while doing their jobs. She thought of it as amazing.

"It's hard to think about anything else than being pregnant when you are pregnant," she said.

Melissa then explained that it was particularly harder to memorize the lines and what the scene requires when pregnant.

The good news about the baby came after NBC's announcement of the renewal of "Brooklyn Nine-Nine" for its eighth season even before the show's seventh season premiere in February 2020. Its first five seasons ran on FOX before it switched networks.

Then again, congratulations are in order for the lovely couple Melissa and David!

READ MORE: Brooklyn Nine-Nine Gets Canceled At Fox After 5 Seasons