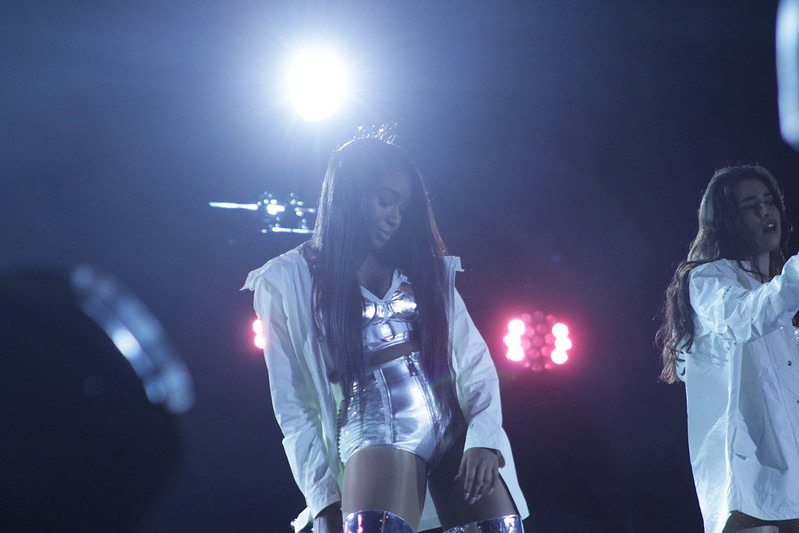 Rihanna revealed she chose Normani because she exudes confidence and people gravitate towards her.

Normani's holiday-glam look was completed with dangling earrings, sparkling hair clips and necklaces. She posed in front of a chandelier and two opposing mirrors that glorified her in several angles.

The celebratory shoot ended with lots of confetti.

'Tis the season of the Savage, sis ♥️ Who better than to slay us into the holidaze than @Normani herself?! #TisTheSavage #SavageXNormani https://t.co/XxUPyPZW7M pic.twitter.com/897ds5DIjN — Savage X Fenty by Rihanna (@SavageXFenty) November 22, 2019

The "Motivation" singer previously stunned audiences and beauty mogul Rihanna herself at the Savage X Fenty show in September. She revealed how it was her first time to dance in lingerie.

Yet, dancing was the singer's first passion. Normani said she felt "beautiful, fearless, and empowered" by becoming part of Savage X Fenty.

Cara Delevingne and Bella Hadid also slayed at the show. However, Normani did not disappoint with her show-stopping lingerie dance. She performed it in front of Rihanna, Paris Hilton, Halsey, Ashely Graham and many more who came to support RiRi at the show.

Rihanna raved about Normani's performance telling her, "Why can't I be you? Thank you so much sis! [You] killed it!" to which Normani responded she had always been inspired by Rihanna.

The Savage X Fenty Fashion Show was not the last time Normani would be seen in a racy lingerie. Normani was supposed to hit it on the stage at the recently-canceled Victoria's Secret Fashion Show.

It turns out something big was waiting for Normani. Shortly after L Brands confirmed the annual fashion show this year would be cancelled, Normani shared the news of her collaboration with Fenty.

I’m the first ever brand ambassador for @SavageXFenty ♥️♥️♥️♥️ !!! I love you @rihanna

i want all individuals to feel empowered and to embrace who they truly are. i don’t always wake up feeling the most confident and powerful, but having some Savage X on always helps!! pic.twitter.com/FvcQVchbvE — Normani (@Normani) November 21, 2019

The "Dancing with a Stranger" hitmaker revealed how she felt "really honored that the ask came from Rihanna herself." RiRi gave a sweet welcome to Normani saying, "Welcome to the family sis! Honored to have you!!"

The 23-year-old quickly took on her role as the brand's spokesperson, praising Rihanna and Savage X for empowering women everywhere. She emphasized that Savage X Fenty celebrates women of all shapes, sizes and colors.

Normani would go on to rave about Savage X Fenty as "revolutionary" and Rihanna as someone who set the bar high. Rihanna continues to make sure her brand embraces inclusivity and diversity.

A Great Year for Normani

The collaboration is a great way to end the year for Normani. Now, fans are asking for a song collab for the two.

Normani previously collabed with Ariana Grande for "Motivation" which soared to the Billboard Hot 100 chart at No. 33.

"Motivation" is Normani's third solo hit on the Billboard Hot 100. She previously peaked at No. 9 with "Love Lies" and No. 7 with "Dancing with a Stranger."

Normani is scaling further in her music career with her performance at the MTV VMAs and joining "The Voice" as an advisor to Kelly Clarkson. She is currently gearing up to launch her first full solo album in 2020.