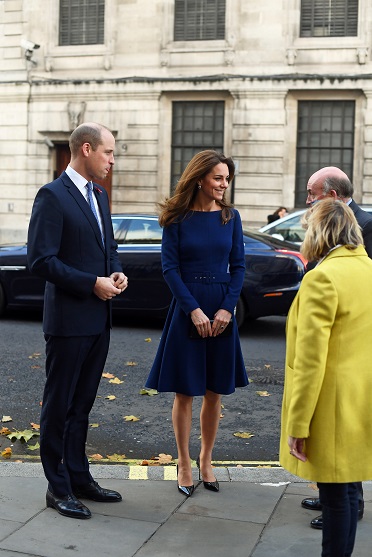 Prince William and Kate Middleton are excited for the holidays, and they are preparing something special for everyone.

In collaboration with TV Cook Mary Berry, the Duke and Duchess of Cambridge will be preparing all-time festive favorites in a BBC special to premiere this month.

The royal couple will be throwing a party for all the volunteers of charities that work hard to give the homeless a great Christmas celebration each year. They want to make these volunteers happy to show them how truly grateful the palace is for all the good work that they do.

In a BBC special next month, Mary Berry along with the royal couple, William and Kate, will be preparing well-loved Christmas treats for these special volunteers.

Each year, workers and volunteers of organizations and charities that help the needy during Christmas do not get to prepare a huge festive meal with their loved ones. They dedicate their time and effort to provide the homeless and the needy with the help that will make their Christmas celebration more meaningful.

This act of goodness, however, did not go unnoticed.

In a BBC special premiering this month, TV Cook Mary Berry will be busy in her kitchen cooking favorite Holiday recipes while William and Kate will be busy helping her out.

The royal couple agreed to help set up the event to make these volunteers and workers know that the royal family recognizes their hard work and dedication for the betterment of society. The special will be the culmination of "A Berry Royal Christmas" airing on Dec. 16 at BBC One.

The special program will also be featuring some of the Duke and the Duchess' causes. In the special, Berry will takethe royal couple on a tour to some of the key charities in Britain. They will also be meeting several people whose lives have been changed for the better by volunteer programs and the people behind them.

View this post on Instagram
We invite you to join The Duke and Duchess of Cambridge and Mary Berry as they serve a festive feast to thank those who are spending their Christmas helping others. On the BBC's A Berry Royal Christmas The Duke and Duchess are joined by cookery legend Mary Berry across four engagements as they prepare festive food for a very royal event to thank all those working and volunteering over the Christmas period...take a look at our other post to find out more. Watch #ABerryRoyalChristmas on @BBCOne at 8.30pm on Monday 16th December. Photo by @mattporteousA post shared by Kensington Palace (@kensingtonroyal) on Nov 30, 2019 at 2:30pm PST

Christmas 2019 will be a celebration like no other for Prince William and Kate Middleton. This collaboration with Mary Berry to highlight the contribution of the volunteer sector truly reverberates the Christmas spirit of giving and sharing.

In the program, Prince William also  highlighted the volunteer work and the giving spirit of the women close to him, including his grandmother, Queen Elizabeth as well as his late mother Princess Diana.

The royal dad of three told Berry how he witnessed both his parents do their charitable works, saying, "My father, Prince Charles, has set up the Prince's Trust. He has remained involved in several different organizations that help the needy."

The Duke of Cambridge also gave a nod to the charitable institutions his late mother Princess Diana worked with, including those that deal with homelessness and AIDS. Prince William revealed that he and his brother grew up in a household that highlighted charities, and it made them feel very lucky that they just had to give back.

Prince William also believes that the challenges his grandmother, Queen Elizabeth II, had to take when she was made queen at a young age made her unique in her own way.

It has allowed her to continue with the legacy of the royal family while making a difference in the ways of public service. Furthermore, Prince William said that by learning more about these charities, one is able to reach out to give more.