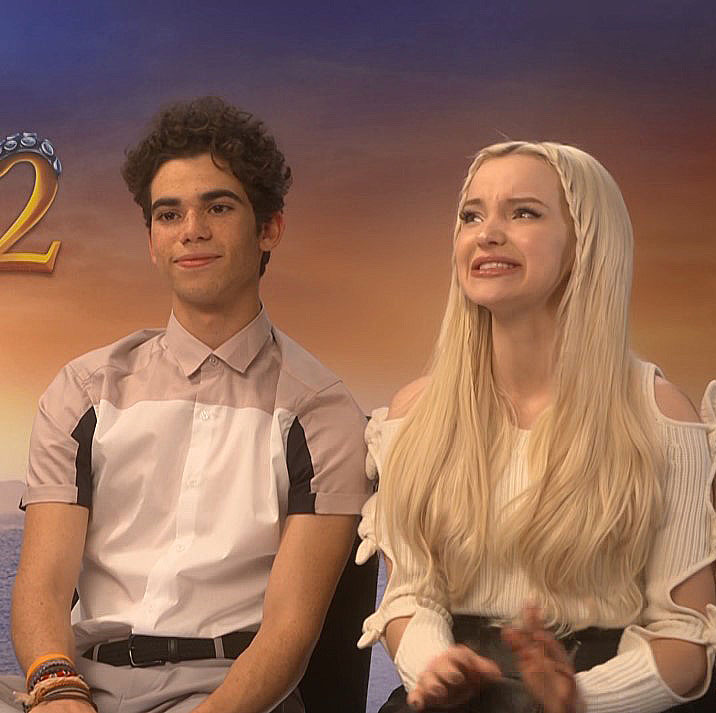 Dove Cameron got a special tattoo to add to her collection of body art.

Some celebrities get tattoos just for the hell of it. They might be itching for new ink, have a celebrity tattoo artist for a friend, or maybe they are in a rock band with members having massive tattoos.

Cameron's tattoo has so much meaning behind it, however, and she has a whole story to her fans.

As part of her 24 Hours with Vogue interview, the "Descendants" actress explained that her tattoo, a revolver shooting out a single rose, actually has a significant tie to her co-star and friend Cameron Boyce.

Cameron explained the tattoo has a double meaning. Not only is she "anti-gun" and "pro-gun regulation" but the movement was also dear to Boyce.

"It's sort of like a nationally recognized symbol for peace and anti-gun movements," Dove said. She had it tattooed on the side of her arm and near her wrist.

"My friend Cameron passed away a few months ago, and he was starting this organization called Wielding Piece," she continued. "He wanted to get influential people holding things that looked like they were in the shape of a gun, but then it would be something artistic or peaceful. He did it with a bouquet. It was lovely."

Cameron also explained that Boyce had posed for the organization holding a bouquet of flowers, which served as her inspiration for the tattoo.

"He did it with a bouquet of flowers, and I think that that's beautiful, and I've been trying to think of a tattoo to get for him since he passed. I just felt that this one was really appropriate."

Boyce died in his sleep on July 6, 2019. The Los Angeles County coroner ruled that the Disney Channel star died from "sudden unexpected death in epilepsy."

After Boyce's tragic death, the 24-year-old actress spoke about losing her good friend. She said that when she heard about what happened, she has just woken up early in a London hotel room to the sound of her phone ringing off the hook.

In an interview in July, Dove recalled how nervous she was how and why she was getting so many texts and calls but then only looked at her mother's text since she knew "she would be the gentlest, and the most concise, whatever it was."

When her mother explained what happened, Cameron immediately phoned Boo Boo Stewart, who had already called her twice.

"We just sobbed without speaking. If there were a word stronger than devastated that could describe the depth of the pain that I was feeling, I would use it," Dove revealed.

Cameron said that she is in therapy and prioritizing her mental health.

Many of Cameron's tattoos have meanings behind them. For instance, her first tattoo was a Capricorn sign because she knew that would always be part of her.

Disney Channel reportedly abandoned plans for a fourth film of "Descendants" after Boyce's death. He starred as Carlos, the son of Cruella de Vil, while Cameron played Mal, the daughter of Maleficent.