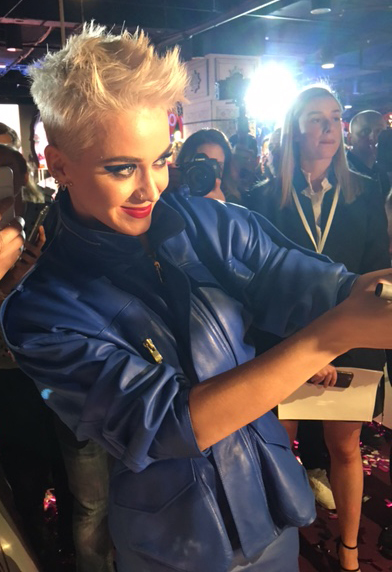 It is normal for couples who recently dated to gush over each other all the time. The first three months of the relationship is said to feel like cloud nine, where your partner seems to be perfect in all terms. But after over a year or two, they said that the "butterfly feels" slowly fade away as you discover all the positive and negative details about each other.

But in the case of power couple Katy Perry and Orlando Bloom, it seems like the cloud nine extended longer as they continue to gush over each other even after almost two years of dating.

Their relationship may have been on the rocks in 2017, but it feels like Katy and Orlando have just started dating yesterday with the way the singer expresses his admiration over her fiance.

In an Instagram post, the 35-year-old singer is all praises for the "Pirates of the Carribean" star as she pours her heart out to celebrate Orlando's 43rd birthday.

The "Fireworks" hitmaker listed down all the positive adjectives to describe her fiance on top of defining him as "incredibly good looking" and "James Bond-like."

"Many people wonder how the pyramids were actually built... but me, I am in constant awe and wonder of how such a loving/kind/compassionate/supportive/talented/deeply spiritual/did I mention incredibly good looking/James Bond of a human being can actually exist in the flesh!" Katy wrote on Instagram on Monday morning.

"There's a reason why all animals and children run straight into his arms... It's his heart, so pure. I love you Orlando Jonathan Blanchard Copeland Bloom. Happiest 43rd year," she added with a heart and cake emoji.

Orlando's photo posing behind the Great Pyramid of Giza was taken back in November during their trip to Egypt to celebrate the singer's birthday.

While friends and fans are in awe of Katy's message, Orlando reciprocated the love and responded: "Ready to climb all them pyramids and mountains with you." Sweet.

The couple was first romantically linked with each other four years ago when they were spotted flirting during the Golden Globes Awards in January 2016. After a few months, they finally revealed their relationship after attending the Cannes Film Festival in May together.

Orlando and Katy's romance took a break in March 2017, but they eventually get back in each other's arms in April 2018.

In February 2019, during Valentine's Day, "The Lord of The Rings" actor popped the question in front of Katy's entire family. He did not just put a ring on it, but put an enormous $5 million flower-shaped ruby ring surrounded by diamonds on Katy's finger!

Everyone is expecting the couple to tie the knot in December 2019, but reports claim they have postponed their initial plan to be able to secure the venue that they wanted.

Both stars have been married in the past. Katy was married to Russell Brand for almost a year until he dumped her over a text message in 2011, while Orlando was married to model Miranda Kerr for three years and had a son, now eight-year-old Flynn.