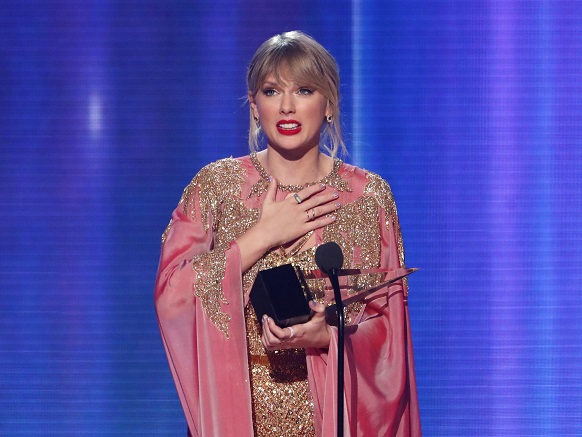 Taylor Swift's Netflix documentary "Miss Americana" just hit both TV and smartphone screens last week and has been receiving nothing but good feedback.

The 60-minute long documentary did not only feature the behind-the-scenes from Taylor's "Reputation Tour," but it also showed an in-depth look at how her fame affected her mental health, eating habits, as well as her journey to use her influence in the field of politics.

One of the major revelations in "Miss Americana" is how the 30-year-old singer and songwriter gets candid talking about her eating disorders. Taylor explained how comments from social media and the press made her insecure about her body, leading her to starve herself which eventually took a toll on her health.

The docu-film features a clip of comments about her body, particularly that from comedian Nikki Glaser condemning Taylor's skinny body-type.

"She's too skinny; it bothers me... all other model friends, and it's just like, cmon!" Nikki said in the clip.

On Saturday, the said comedian took to Instagram to redeem herself and basically begged for Taylor's forgiveness.

"I love @taylorswift," Nikki began alongside a photo of herself wearing a black shirt with a print of Taylor's face and a text that says: "Taylor Swift Red."

"Unfortunately, I am featured in her new documentary as part of a montage of asshats saying mean things about her," she added.

In the docu, the "You Need To Calm Down" singer explained that rude comments about her body are one of the reasons why she decided to literally disappear and be missing in action for about a year.

The 35-year-old comedian said that she was horrified to hear her own voice speaking those awful words from an interview she did five years ago.

The comedian said that she has also been battling with an eating disorder for the past 17 years and knows exactly how Taylor feels when people comment about them being "too skinny."

In the end, she offered Taylor her sincerest apologies and hope the message gets to the singer herself.

"I really have no need to post this other than to apologize to someone who seriously means SO much to me," Nikki  wrote, adding that she's been getting a couple of death threats from Swifties who already saw the docu-film.

"I just hope this somehow gets to her so she knows I'm sorry for any pain I caused her and that I'd love to be her friend someday," she added.

View this post on Instagram
I love @taylorswift. Unfortunately, I am featured in her new documentary as part of a montage of asshats saying mean things about her, which is used to explain why she felt the need to escape from the spotlight for a year. It’s insanely ironic because anyone who knows me knows I’m obnoxiously obsessed with her and her music. I first heard myself in the trailer last week as I watched it alone in bed (as soon as it came out bc I was so excited!) and I was horrified to hear my own voice. The sound bite was from an interview I did 5 years ago and I say in SUCH a shitty tone, “she’s too skinny; it bothers me... all of her model friends, and it’s just like, cmon!” This quote should be used as an example of “projection” in PSYCH101 textbooks. If you’re familiar with my “work” at all, you know I talk openly about battling some kind of eating disorder for the past 17 years. I was probably “feeling fat” that day and was jealous. Also, I’ve had people say the same shit about me being too skinny before and know how terrible it feels to hear that when you’re struggling. And I was only bothered by her model friends because I’d like to be her friend and I’m not a model. I really have no need to post this other than to apologize to someone who seriously means SO much to me. I only got a couple death threats from die-hard Swift fans, which as one myself, I totally get. So while I’ll consider going to “die in a hole you motherfucking asshole”, I just hope this somehow gets to her so she knows I’m sorry for any pain I caused her and that I’d love to be her friend someday (when I start modeling) and tell her how much her music has influenced my life and comedy. In fact, her song “The Man” is the inspiration for my new hour of material and I feature the song is multiple iterations during my current tour. I love you Tay, and I can’t wait to watch 99.97% of your new doc #missamericana ️ A post shared by  Nikki Glaser (@nikkiglaser) on Jan 31, 2020 at 11:16am PST

The public apology indeed reached the "Lover" artist and had nothing but a sweet response to her former bully.

"Wow. I appreciate this so much," Taylor wrote, adding that the primary goal of the documentary is to highlight that people can change opinion as they grow and learn about themselves over time.

It looks like the documentary did not just serve Swifties all over the world, but also shrank Taylor's long-list of nemesis.