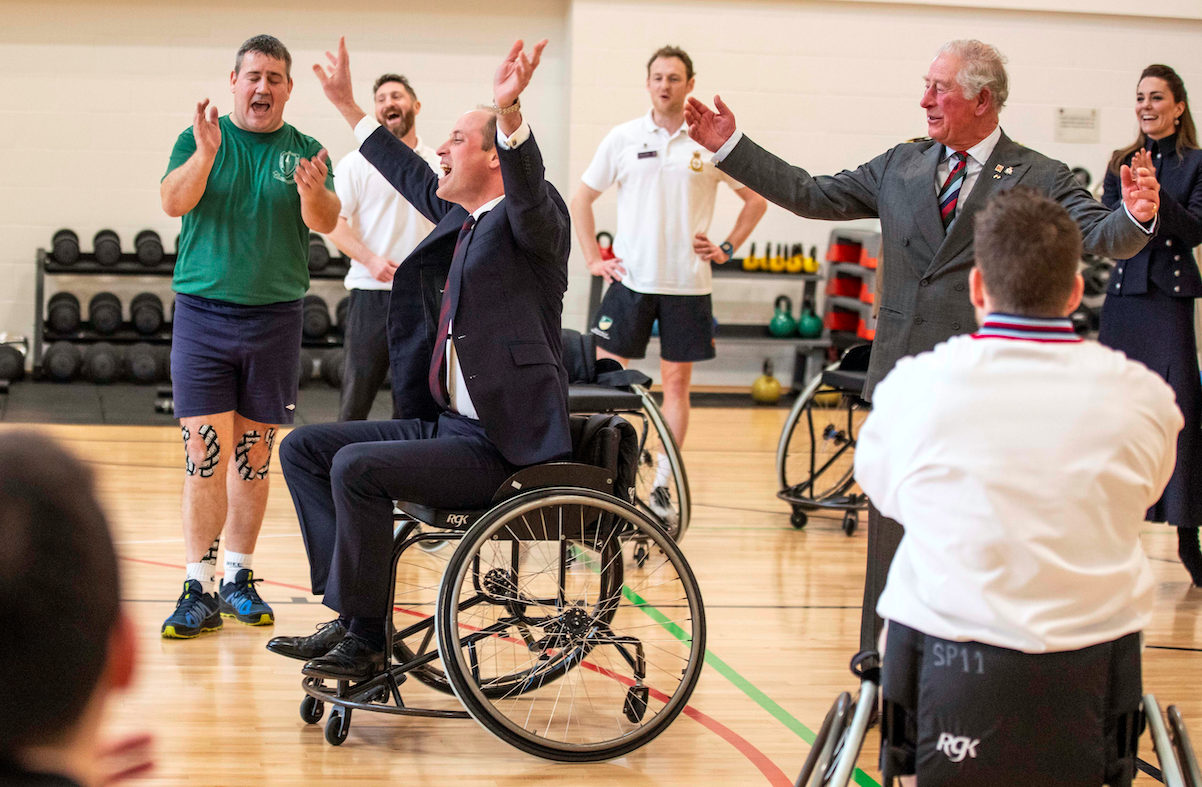 The Prince of Wales and the Duke of Cambridge bonded over wheelchair basketball as they joined their wives in a rare and first joint appearance in nine years.

The 37-year-old Prince tried his hand at the sport while meeting injured military staff on a visit to the new Defense Medical Rehabilitation Center in Loughborough early afternoon on Feb. 11.

The Duke of Cambridge needed little help from his father, as he struggled to get a shot before finally scoring to the amusement of his father behind him.

Prince Charles wheeled Prince William into the right position in front of the servicemen and servicewomen who were at the court to see the royals play.

Major Les Richardson of the Allied Rapid Reaction Corps, who broke his ankle in a climbing accident and had several operations since, was the one who lent Prince William his wheelchair.

According to him, he did not think Prince William would want to get in the wheelchair, but he encouraged him to try.

"He is a good sport. He said he was going to try it, see what it was like, see how difficult it was," Richardson shared.

The 71-year-old heir to the throne, mewanwhile, watched his son lovingly as he fails to shoot some hoops. He was on hand with a reassuring shoulder rub when Prince William missed a couple of shots.

"It's not going to go in," Wills exclaimed.

However, when the Duke finally shoot the ball, both royals throw their hands up in delight.

"Prince William, Duke of Cambridge has his shoulders rubbed by Prince Charles, Prince of Wales after the Duke attempted and failed to throw a basket ball into the hoop pic.twitter.com/KB93f2yO9R — Mace (@RoyaleVision) February 11, 2020

Spectators and staff could be heard cheering and clapping for their team effort and getting up to celebrate, and the two shook hands with those who helped them.

For the British royal family, it was an unusual show of public affection.

For the royal watchers, it was clearly a sign of things to come.

Prince Charles, Camilla Parker Bowles, Prince William, and Kate Middleton toured the facility, including the gym and the prosthetics workshop, on their first official outing since a 2011 charity concert.

According to People Magazine, the visit was more chaotic than royal engagements because it is rare to see two royal couples in one engagement.

At one point, Prince William joked, it was bad enough that it was just the two of them because "When there's four of us, it's a nightmare."

Prince Charles even said, "There's too many of us."

This visit comes after the royal family continues to adjust to the shift in responsibilities when Prince Harry and Meghan Markle stepped back from their roles as senior royals.

Prince Harry was obviously absent from the powerful royal visit that happened on Tuesday, and the younger Prince might have felt he missed out a lot on the meaningful visit.

He worked in the military during his early years as a royal, but he had to give up all of his treasured military titles following his decision to step down as a senior royal.

The father-of-one was once dedicated to helping members of the armed forces by being part of the Invictus Games project.

And because Prince Harry is no longer part of Britain's captain-general of the Royal Marines, Princess Anne is taking over the ceremonial title, making her the first-ever woman to hold the position in military history.

READ MORE: Queen Elizabeth to Abdicate in 2020: Biggest Evidence Yet!