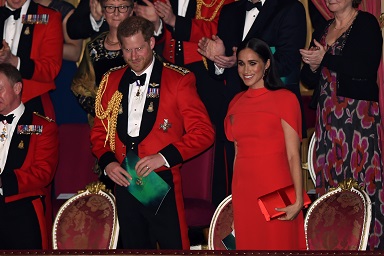 Meghan Markle and Prince Harry are soon going to be officially non-senior royal members. While they wanted to be financially independent, hence the decision to leave the royal life, Markle is said to be now beyond worried about whether they can really make it as "commoners."

According to a royal insider, the finances of Prince Harry and Meghan Markle are presently in shambles. They are reportedly shocked by all the expenses they have to shoulder now.

However, what's worse is that they just repaid the costs for the multi-million-pound refurbishment of their Frogmore Cottage Home, so funds are really low. The insider shared that the two have promised to pay back the money they used for the renovations into the Royal Purse as part of their deal with Queen Elizabeth.

Now that their financial situation is so much clearer now, the Duchess of Sussex is starting to worry and is urging her husband to get a job that can see them through.

Speaking to US tabloid National Enquirer, the insider revealed, "This debt is a blow to their ambitious plan to become freewheeling billionaires in the world." The insider added, "Meghan is terrified that her dreams of being a Hollywood queen will be destroyed by this financial nightmare, and she is insisting that Harry make a move and resolve the crisis."

Markle is hardly jobless and dependent on Prince Harry, though. it was just confirmed that she struck up a deal with Disney to narrate its latest documentary, Elephant. The thing is, the money has already been donated as the project was filmed way before she and Harry announced their departure from the Royal family.

Moreover, they recently announced that a private arrangement for their security in the United States has already been made, so that means more expenses!

They made the announcement following President Donald Trump publicly tweeted that the United States certainly will not foot for the two's security detail, regardless if he is personally close to them. For several hours after that announcement, people were bashing at the possibility of the two asking the United States to make some special funding arrangements for their safety and security.

Relying on Prince Harry, however, might not be a good idea, the insider shared. even if Harry has grown up privileged, he hardly has marketable skills because he never had a real job, at least from the insider's point of view. "He does not have a university degree, nor does he know a second language. He only has military training," the insider rationalized.

Harry may have made a big sacrifice for his "rebellious American wife," but they might soon see this sacrifice blow up in their faces. The insider even claimed that this financial issue is starting to ruin their marriage, and they could now be at a breaking point.

It remains to be seen though if more acting or narrating roles open up for Markle. "Elephant' will only start streaming on April 3, so the world has to reserve judgment on how well she can narrate. The documentary follows the journey of an elephant mother-child duo as their herd traverses the Kalahari Desert.