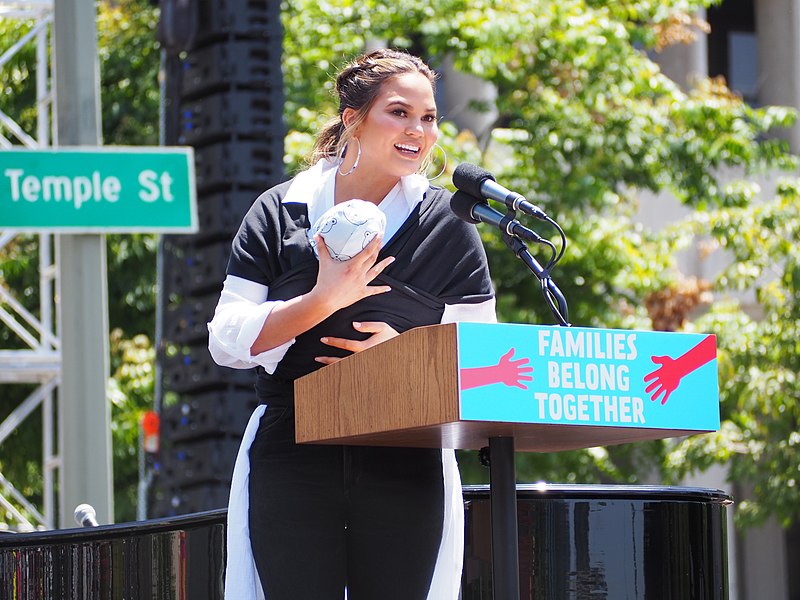 Chrissy Teigen has finally shared the truth about going through breast enhancement surgery in her 20s. The cookbook author pokes fun at the thought that she went under the knife ten years ago to give herself the breast size she has always wanted.

On its 10th year anniversary, Chrissy Teigen got real and honest about undergoing breast enhancement surgery when she was in her 20s. In her typical funny tone, the 34-year old model recently was candid about undergoing a plastic surgery procedure.

She got cheeky in her Instagram post, saying that she got breast enhancement when she was young and was starting to make a name for herself.

Teigen posted two photos of herself walking the runway of the Beach Bunny Swimwear fashion show modeling a white bikini. In the caption, she wrote, "Happy 10 year anniversary to these titties and RIP to these teeth."

But the fun just did not stop with Teigen and her honesty. In the comments section, Chrissy exchanged witty commentaries with Kim Kardashian-West. The reality star left multiple crying-lauging emojis to Teigen's post, to which Teigen replied.

"@kimkardashianyou guys were at this show!!! It's why I was listed as a "model walks runway" no one cares about me ba hahaha," the model wrote.

Comedian Whitney Cummings, on the other hand, left a question for Tiegen: "Wait isn't ten years when we need to take them out?!"

The star revealed that she wanted to but said that it was unfortunate that the "stay at home" mandate in California is keeping her from doing so. She also cited the coronavirus pandemic was the reason why she cannot get the implants removed.

"@whitneycummings yes dude and I really wanted them OUT. Quarantine would have been a perfect time but apparently it's not 'ESSENTIAL' smh," Teigen jokingly replied.

View this post on Instagram
happy 10 year anniversary to these titties and RIP to these teeth. @christopher.petersonA post shared by  chrissy teigen (@chrissyteigen) on Mar 30, 2020 at 11:53am PDT

Honesty At Its Best

In her interview for the cover story of Glamour UK, Teigen got candidly honest about going under the knife. Earlier this month, she revealed that she has some regrets about getting breast implants.

"Yeah, I did my boobs when I was about 20 years old," she openly shared. "It was more for a swimsuit thing. I thought if I'm going to be posing, laid on my back, I want them to be perky! But then you have babies and they fill up with milk and deflate and now I am screwed."

Teigen debuted her modeling career when she posed for the 2010 issue of the Sports Illustrated Swimsuit issue. She further explained that she kept the same cup size but she "just filled them out so they still look rounder and firmer."

Chrissy also revealed that if she had the choice, she would like something done with her breasts again.

"If I could do one thing, it would be to have a lift."

However, the "Cravings" cookbook author revealed that she has become much more apprehensive about going under the knife again for plastic surgery.

"When you have kids, you think of the risks that come with surgery. I think it isn't the best way to die -- boob surgery," Teigen said.