You don't mess with Selena Gomez - she is suing a Chinese software and technology firm and a UK-based company for allegedly using her image without her permission.

On Tuesday, the "Lose You to Love Me" hitmaker filed a $10 million lawsuit against the tech companies behind the app, "Clothes Forever - Styling Game," accusing them of profiting from using her name and her likeness.

Guangzhou Feidong Software Technology Co., the China-based seller of the game, and MutantBox Interactive Limited, the British company that holds copyrights to the game, are being sued by Selena.

According to the legal documents obtained by TMZ, Selena claims that the game blatantly ripped off her cover photo from the fashion magazine Flare and slapped it on their app.

"Defendants never requested, consulted, or informed Gomez regarding the use of any of her publicity rights in connection with the Game, "and adds, "Nor, if asked, would Gomez have consented to such use for the game which relies on the unsavory practice of luring its users to make in-game purchases in amounts as much as $99.99 to fund imaginary spending in the Game and unlock features."

The suit also noted that the mobile game is "bug-riddled" and is rated 3.5 stars out of 5 by reviewers in the App Store. Aside from "damages," she is also suing for a share of the profits and asking for the game to stop using her image. 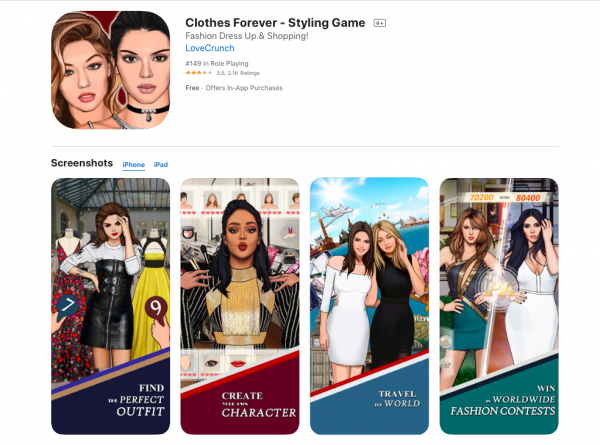 "Clothes Forever - Styling Game" is available for download in Apple's App Store. The game allows users to buy "diamonds" that range from $.99 up to $99.99 to go on virtual shopping trips with other celebrities.

The promotional material states that the player can interact with "the most beautiful models and celebrities," which includes the Kardashians, Gigi Hadid, Beyoncé Knowles, Taylor Swift, and many more. These celebrities will allegedly ask the player for fashion advice.

Selena's attorney, Alex Weingarten, told The Blastthat the 27-year-old is a style icon, and the game is an "egregious violation of Selena's rights, which we will litigate vigorously to vindicate."

The documents further claim that the former Disney actress worked her entire career to build up a strong brand, claiming that each sponsored post is reportedly worth as much $800,000 each, being the fifth most popular person on Instagram with more than 173 million followers.

Selena Gomez is only one of the many celebrities who are suing different mobile app companies for illegally using their images.

In November 2019, Kim Kardashian West sued the developers of the "Sweet Cam" app for using a photo of the reality star to promote their app without her knowledge.

At the time, Kim was seeking more than $10 million in damages in what her legal team said was "a calculated, unlawful scheme to usurp, use, and exploit her image, celebrity, and universal recognition in a worldwide marketing campaign."

The developers behind iHandy have also reportedly reaped millions of dollars' worth of advertising and promotional services from Kim, all without paying for it.

Selena Gomez's recent photo reportedly sparked concern from her fans and family as she looks unrecognizable because of health; is this true?

Selena Gomez and Chris Evans are the recent celebrity pairing that fans are shipping online.

The new whodunnit Only Murders in The Building has us all trying to figure out who the murderer is. Here are our five top suspects.

The Disney child star and singer Selena Gomez recently appeared on a magazine cover with a stunning Manilyn Monroe look where she also talked about her experiences at a young age.

Was Selena Gomez 'Mocked' in 'The Good Fight' or Did Fans Prematurely React?

The fans however could have understood the episode, or scene wrong.

Did Selena Gomez Admit to Being Fooled by Justin Bieber? Fans Think So!

Has Selena Gomez finally found herself a boyfriend? Recently, the former Disney Channel star made a rare appearance with some of her friends this weekend.

While her former boyfriend is already married, Selena Gomez is still single and seems to be doing just fine.

Selena Gomez might bid goodbye to her career earlier than expected.