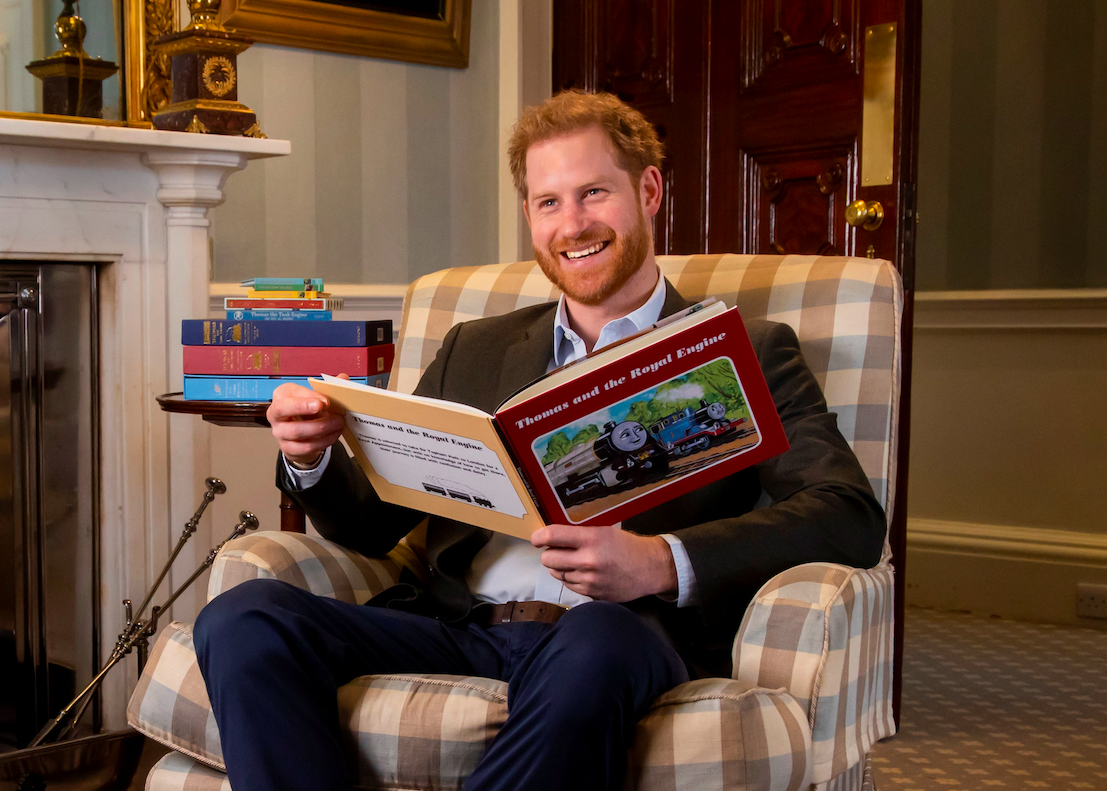 Prince Harry follows in the footsteps of his wife, Meghan Markle, in revealing his first non-royal role.

The Duke of Sussex is helping "Thomas & Friends" mark their 75th anniversary in the most special way, and that is by making an on-camera introduction on their newest episode, "Thomas & Friends: The Royal Engine."

In the 35-year-old's introduction, Prince Harry is seen sitting in an armchair, reading from a book about the train's adventures.

He introduced the episode saying, "It all began when a young boy lay ill in bed. His loving father entertained him with stories of a special railway on the magical island of Sodor."

Prince Harry continued, "Those stories would go on to become the tales of the most iconic tank engine the world has ever known, Thomas the Tank Engine... 'Thomas & Friends' is celebrating 75 years of friendship and teamwork."

In a statement, the Duke of Sussex said he has "fond memories of growing up with 'Thomas and Friends' and being transported to new places through his adventures."

The father-of-one added that the animated train had been a "comforting, familiar face to so many families over the last 75 years - entertaining, educating, and inspiring children on important issues through exciting stories and characters."

The recorded clip, however, was recorded in January, just before Prince Harry and Meghan Markle quit the royal family. He did it in exchange for a charity donation.

The newest episode will feature Prince Harry's grandmother, Queen Elizabeth II, and his dad, Prince Charles, as a young boy, and they are animated characters.

The TV special will see Thomas travel to London for the first time to take Sir Topham Hatt to receive an honor for distinguished service to the railway at Buckingham Palace.

As it is Thomas' first time visiting London, he gets lost along the tracks and finds himself in all sorts of messy predicaments. However, this doesn't stop him from eventually finding his way.

The 22-minute special episode will also feature a new character, the Duchess of Loughborough, which is voiced by actress Rosamund Pike.

She said, "It is an absolute honor to have the chance to appear in the show. I take it as a big responsibility to play Duchess."

It is seen in previous reports how Prince Harry is attached to the engine, back in September 1987 during his first day of nursery school, where he was seen carrying a "Thomas the Tank Engine" bag.

The story was created 75 years ago by a British clergyman, Reverend William Awdry, as a storybook for his young son during a bout of the measles. It was then called "The Railway Series."

However, the brave blue tank engine doesn't appear in the debut story.

In 1946, Awdry got his own illustrated book called "Thomas the Tank Engine" and swiftly took over from Edward, Henry, and Gordon as everyone's favorite.

By the 1980s, the train stories were turned into a stop-motion animation series, and then in 2009, it was moved to CGI.

Since then, the story grew to become the massive children's franchise we all know and love today and is watched by families in more than 230 countries and territories around the world.

The special episode will be available in Netflix on May 1.