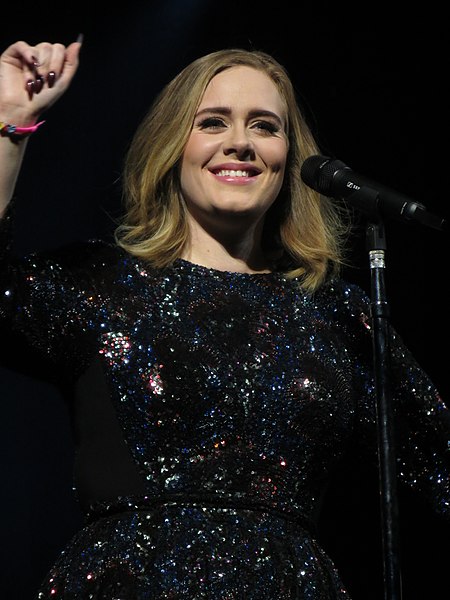 Adele has been on a weight loss journey for a couple of years now.

But today, on her 32nd birthday, the singer posted a photo of her on Instagram looking so sexy in a black mini dress and high heels with a massive smile on her face.

She captioned the photo, "Thank you for the birthday love," thanking her 33.5 million followers. The photo shows the singer-songwriter outside in the center of a gold circular sculpture surrounded by bouquets.

Fellow celebrity friends of the Grammy award-winning singer commented on Adele's Instagram picture. Chrissy Teigen, shocked, said, "I mean, are you kidding me?"

The "Rolling in the Deep" hitmaker, who has not posted anything on her social media accounts since December, has also praised the work of frontline healthcare workers amid the coronavirus pandemic.

"I'd like to thank all of our first responders and essential workers who are keeping us safe while risking their lives! You are truly our angels."

Adele's last post was on December 23, 2019, where she posed next to the Grinch on a holiday party. She captioned the photo, "We both tried to ruin Christmas, but then both our hearts grew! Thank you for coming to my party and making us feel like kids Grinch."

She has reportedly been on a weight loss journey since her divorce in September and credits a special diet and a lot of Pilates for the fast results.

Fans think that the "Hello" singer looks exactly like "American Horror Story" actress Sarah Paulson in her new birthday photo. But it wasn't the first time fans noticed how the two celebrities look similar. For years, people said they have the same bone structure and facial features. But now that Adele is on her weight loss journey, this new photo, in particular, made those who hadn't seen the connection before stopping in their tracks.

Why does Adele look like Sarah Paulson? pic.twitter.com/GOrnLvU4r0 — ruds ️ (@therahrahbitch_) May 6, 2020

Sarah even became a trending topic on Twitter, with fans saying, "Wow. It took me a minute realizing this was Adele and not Sarah Paulson."

Adele and her husband, Simon Konecki, had a very special relationship that nobody knew that she was even married. It was only after five years of being married when she mentioned him on her Grammy 2017 speech thanking him for his support.

When their marriage was so under the radar, fans were shocked by the news when Adele's team announced they had decided to split.

Reps of the siren told the Associated Press, "They are committed to raising their son together lovingly. As always, they ask for privacy."

The reason for the split was reportedly the "different stages of their lives" and the age difference. Konecki is 14 years old than the singer.

Another reason why they divorced was that they preferred living on opposite sides of the pond. Adele loves Los Angeles and New York, while Konecki had a lot of philanthropic works that required him to be in Africa, India, and other places.