The 22-year-old has recently been accused of another Photoshop fail as some of her followers on Instagram noticed in her newest sexy photo.

The Kylie Cosmetics mogul shared a picture of herself on a sofa, in front of an expensive luxury handbag.

While most fans were looking at the lavish purse, many fans were distracted by what seemed like an editing error.

In the photo, the mother-of-one's fingers looked distorted, as if she used a smooth app, like Facetune, on her face that also smoothed out the joints on her fingers.

It was also noticeable that her lips were a bit blurry, and her jawline looked like it had been shaved.

A Kylie Jenner follower commented on her Photoshop fail, saying, "Look at the third picture.. you are a bad photoshoper, Kylie."

Others were convinced that the youngest self-made billionaire slimmed down her waist via Photoshop as well, because she may have accidentally distorted the fireplace behind her.

One commenter said, "Photoshopping waist as always. But that fireplace corner.. #PhotoshopFail."

One of Kylie's picture was also looking weird, as she has used heavy filters on her face and changed her eye color that made her look completely different.

This wasn't the first time Kylie was accused of over-editing her pictures.

In her bikini snap, fans of the reality star spotted jagged swimming pool tiles. A lot of followers were convinced that her secret editing sliced out some of the tiles.

An Instagram user called her out, saying, "Had time to screen the pic, you now-deleted you posted on your IG.. what a fail."

Another person said, "You would think with all the money that @KylieJenner has, she would be able to photoshop her pictures a little better."

Another Kylie Photoshop blunder was when she posted a picture of her and Stassie Karanikolau that showed the cosmetics and skincare mogul edited the crap out of her image.

Kylie Jenner and her sisters, Kim Kardashian West, and Khloe Kardashian have all had their fair share of photoshop fails. No matter what, the sisters can't quit skimming down their waists, altering their eye color, shaving off their jawline, after being called out multiple times.

Recently, Kim Kardashian West shared a picture on Instagram that showed her dressed in a complete snakeskin look- with snakeskin, top, bottom, nails, and hair. 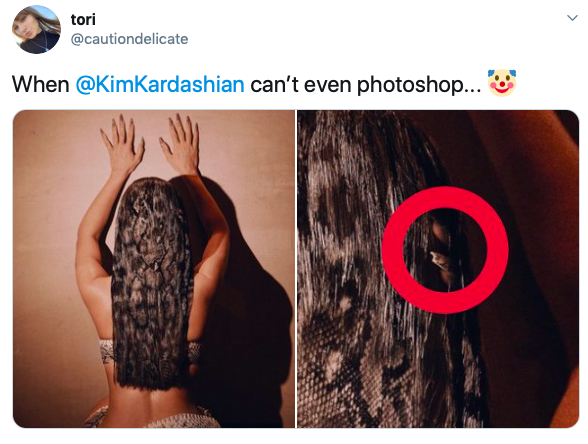 However, Kim's snakeskin covered head shows remnants of her hand and nails on the upper right side.

Another Kim photoshop fail was when they released photos for their KKW x Kylie fragrance launch, and Kim looked like she had six toes.

Khloe Kardashian has also posted an old photo that she liked. However, social media users came to her for what they claim to have been a highly-edited picture.

In the photo, Khloe donned an Ariana Grande ponytail and captioned the picture, "Happy Monday!" 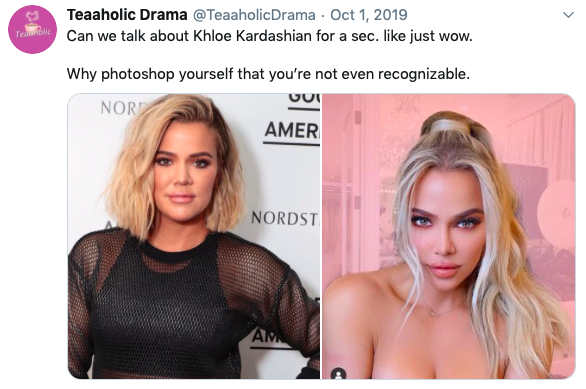 Fans took to Twitter to express their disbelief, saying, "Can we talk about Khloe Kardashian for a sec. Why photoshop yourself that you're not even recognizable?"