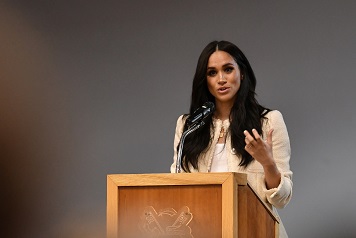 Meghan Markle was the first ever mixed-race British royal family member in the history of the monarchy. However, her time in the monarchy didn't last long, as she and her husband Prince Harry departed from The Firm after just a couple of years.

Now, there are reports that she was not happy and was full of grief throughout her stay with the British royals.

After Meghan married Harry in 2018, she automatically became the center of criticisms thrown by the media and some royal watchers. Despite that, she never let her guard down and performed her duties well.

However, royal experts suggested that everything that happened tortured the Duchess of Sussex, and she just handled it professionally so no one saw her weeping over the issues and criticisms that she has received.

During the latest "Pod Save the Queen" episode, podcast host Ann Gripper, body language expert Judi James, and Daily Mirror's royal editor Russell Myers discussed how Meghan went through a lot of grief without showing it to the public.

"She clearly played it very well. Full marks to her, because she said she'd gone through a lot of grief, but she never showed it," James said when asked if she noticed that Harry and Meghan were both unhappy. "And, I think the actress side helped her get through that."

James added that in all footages before Megxit, the duchess always flaunted a smile on her face and engaged with the royal watchers through eye contact.

Interestingly though, during their first post-Megxit appearance, the happiest photograph of the two was captured.

When the royal couple attended the Endeavour Awards at Mansion House in London, royal photographer Samir Hussein snapped the two as they stepped out arm-in-arm and walked through the rain.

"I spoke to some of their team, and they were really happy about it and talking about it," Hussein told Us Weekly, referring to the image where Harry and Meghan gazed and smiled at each other in the rain.

Despite the happy image they projected before that, the body language expert and royal commentators insisted that Meghan, as well as Prince Harry, were both in pain and in the end, Megxit saved them from the royal family.

In the same interview, the experts pointed out that Meghan always looked lovestruck with Harry, which made their pain a little less obvious.

Meanwhile, unlike Meghan, the Duke of Sussex failed to hide his grief during their last engagement.

"But, I think he was looking way too unhappy, way too serious, way too annoyed, really," James explained. "Clearly he had a very, very difficult decision to make."

Aside from the special moment during the Endeavour Awards, royal biographer Katie Nicholl pointed out that the Duke and Duchess of Sussex were already "feeling it" since the beginning of the tour in South Africa -- which was featured in an ITV special documentary.

During that time, things were not happening according to their plans as they struggled with unwanted and negative media attention. Nicholl highlighted that Meghan "made everything look easy" even when nothing was easy for her in the first place.

"They projected a very happy image of themselves - Meghan and Harry - but scratch beneath the surface and all wasn't what it seems," Nicholl uttered. "They were both unhappy, Meghan particularly, there were big parts of her new life that she was finding hard to adjust to."

Now that she is living her LA dream with Prince Harry and Archie, royal supporters hope that she no longer feels tortured anymore.