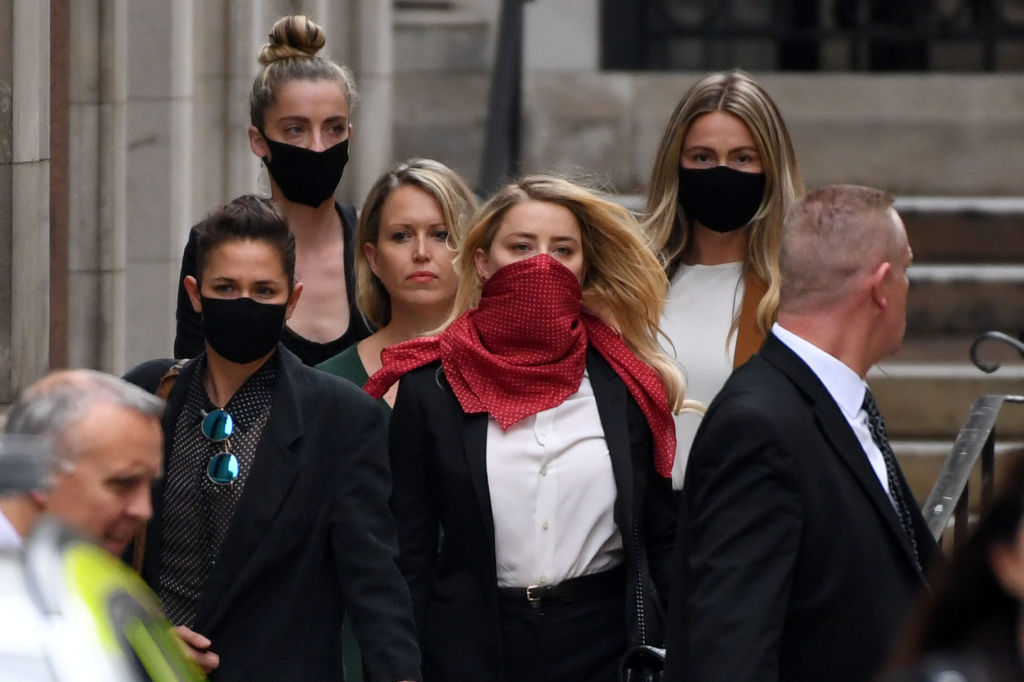 Amber Heard reportedly wrote an email to her ex, Johnny Depp but did not send it. The email detailed how the actor has a "Dr. Jekyll and Mr. Hyde" persona and she was terrified about it.

She said she was never sure who she was dealing with - the man she loves so much or the monster she loathes. This email was read out loud in the court,  as the hearing of Johnny Depp's explosive libel battle against "The Sun" starts.

The letter was reportedly written way back in 2013.

She detailed in here how Depp was steeped within his drug and alcohol consumption, which reared its ugly head time to time, causing him to assault Heard.

"You have hit me repeated. Something you should Never have done. What a f****** man you are," she wrote in the email, which was longer and more detailed.

The message was read out loud the The Sun's representative, attorney Sasha Wass. It was one of the key tools used by the tabloid's camp in the attempt to defend its description of Depp as a wife beater. Depp was grilled for the past two days while being on the witness box.

Despite the grilling however, Depp vehemently denies all the assault allegations against his ex wife. He was even accused of blacking out whenever he took the substances he was addicted to, which caused him allegedly to forget that he hurt Amber Heard.

During the cross examination, Depp reacted to the said email unsent, now an evidence that he hurt Heard.

He firmly said: "Hoax is probably the best word one could use because the allegations, all of the allegations, are patently untrue. From hearing you read out this (email), that was not sent to me, and from some of the information I have garnered from my experience yesterday and having studied the case, I will suggest, ma'am, that it appears to me that Ms. Heard was building a dossier very early on that appears to be an insurance policy for later."

At present, since the case is still ongoing, the world cannot do nothing but wait for the verdict to know if the "Pirates of Caribbean" actor truly was a wife beater.

After all, there also exists evidence of Amber Heard probably lying about all of the abuse claims.

When the divorce was finalized between them and Heard allegedly gained hefty amount in millions from Depp as settlement, the actress has carried on portraying herself as a victim. She wrote an op-ed piece about her experience and how she became the ultimate survivor of it all. Depp was not named, but everyone knew who she was referring.

Depp filed a $50 million defamation suit against her, showing evidence that Heard could have faked her own abuses.

While Amber Heard said Depp gave her two black eyes in 2015, when she was set to appear on the "The Late, Late Show with James Corden," her own stylist at the time said she did not see any marks at all. She even said that she saw no cuts or injuries to the rest of the actress' body.

Then there was the 911 call that someone made about Amber being abused. Some evidence came out to hint that the caller was Amber Heard's friend and the actress put her up to making the "fake" call.

Since the two warring sides have strong evidence to support their claims, their respective fans just have to wait for the final verdict on these cases - the libel case against The Sun and the defamation case against Amber Heard.

LONDON, ENGLAND - JULY 09: Amber Heard (red covering) is accompanied by her sister Whitney Heard (back L), her lawyer Jennifer Robinson (C), her personal assistant (R) and her girlfriend Bianca Butti (L) as she leaves the Royal Courts of Justice, Strand on July 9, 2020 in London, England. The Hollywood actor is taking News Group Newspapers, publishers of The Sun, to court over allegations that he was violent towards his ex-wife, Amber Heard, 34. (Chris J Ratcliffe/Getty Images)