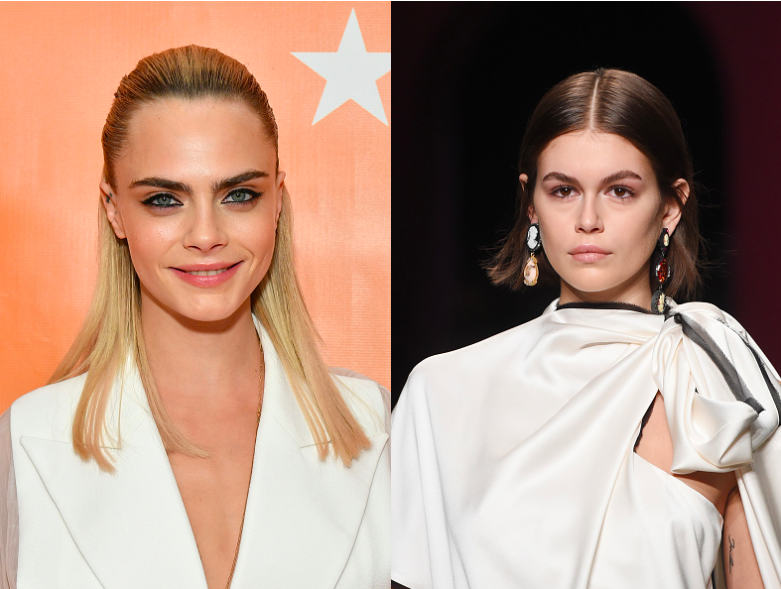 A couple of weeks ago, supermodels Cara Delevingne and Kaia Gerber were spotted in an extreme PDA while at a rally for Black Lives Matter.

All eyes were on the pair, who seemingly couldn't take their hands off each other, suggesting that they were more than just friends.

The 18-year-old brunette and the model-actress walked hand-in-hand among the protesters outside the Hall of Justice.

In the height of the coronavirus, both Cara and Kaia are holed up with Cara's ex-girlfriend Ashley Benson and their friends Tommy Dorfman and Margaret Qualley.

Since Cara Delevingne and Ashley Benson split in April, it has been noticed that the supermodel and the daughter of Cindy Crawford have been spending more alone time together.

A source told Life & Style that their relationship "is in the early days."

"While they're not willing to label themselves as a couple just yet, it's only a matter of time. Cara and Kaia make each other so happy," the source revealed.

The pair's non-stop hand-holding and face-nuzzling at the July 15 protest gave away a budding romance between the two.

Cara Delevingne and Kaia Gerber were spotted together at a BLM protest. pic.twitter.com/VCRECR9lUA — MODELS (@ModelsFacts) July 16, 2020

Another early sign was when the 27-year-old blonde actress released her directorial debut that starred Kaia in a steamy music video.

The source added, "Cara is a friend of the family, so she and Kaia were already close."

They added, "But they seem to get closer by the day. There's a real comfortableness there."

Both were already single, so it's no surprise that they landed in each other's arms.

While there is no confirmation or reports yet that they are dating, friends of the two said, "it's only a matter of time."

Why Ashley Benson and Cara Delevingne Broke Up

According to a source who spoke to People magazine, Ashley and Cara's relationship "just ran its course."

It was revealed that the former lovers had had their ups and downs in the relationship, but both knew that their break up in May was the end of the line.

In fact, a few weeks after their breakup, Ashley Benson and G-Eazy sparked dating rumors.

They were spotted holding hands, leaving a store in Los Angeles, and even raised eyebrows when the two were seen locking lips in the car.

A source told People Magazine that the two were most likely a "fling for now."

By the end of June, it was later revealed that Ashley would be featured on the musician's new album, "Everything's Strange Here."

Many thought that Ashley Benson cheated on Cara Delevingne and started sending hate to her ex.

"It's important now than ever to spread love, not hate," the model wrote on her Instagram Stories. "To everyone hating on @ashleybenson, please stop. You don't know the truth, only her and I do, and that's exactly how it should be."