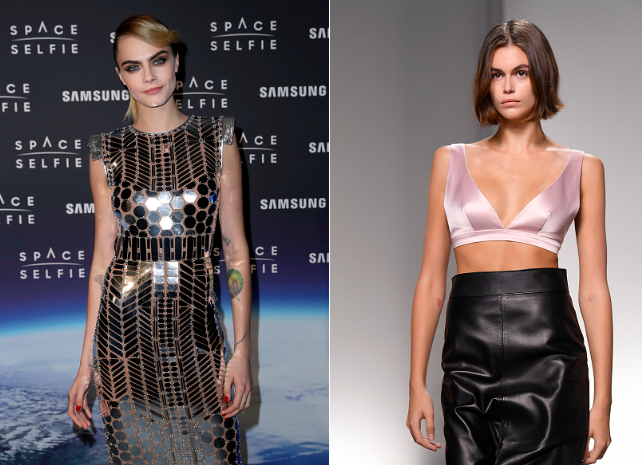 Did Cara Delevingne and Kaia Gerber just confirm that they're lovers?

On Wednesday, the two made their status official, as "best friends," by getting matching tattoos.

The models had cemented their relationship when Kaia revealed on her Instagram story, wishing the "Paper Towns" actress a happy birthday.

She wrote, "Happy birthday to my solemate @caradelevingne," while sharing a snap of the two runway stars' feet and hands intertwined.

Kaia then shared a snap of their feet facing together, with the pun, "solemate" written on the inside of their foot.

In another Instagram Story tribute to Cara, she described her as "the best protest buddy."

In July, Cara Delevingne and Kaia Gerber were spotted marching together at a protest of the Black Lives Matter Movement in Los Angeles.

At that time, it was fresh news that Cara had recently broken up with her two-year-old girlfriend, Ashley Benson. Kaia was also spotted with "Saturday Night Live" comedian, Pete Davidson, during winter.

Cara Delevingne and Kaia Gerber have been spending the quarantine lockdown together and have greatly supported each other after enduring breakups for the last couple of months.

Davidson revealed that his relationship with Kaia didn't come at a good time for him, as he battled addiction and mental health issues. Following his split from her, Davidson immediately checked into rehab.

Speaking of their breakup to Charmalagne tha God, he said, "It was before I went to rehab. She should be having fun. She shouldn't have to worry about some dud that just has issues and s***. She should be enjoying her work."

Meanwhile, Cara Delevingne and Ashley Benson shocked everyone in May when they have decided to break up.

As per People magazine, they actually broke up in April.

"Cara and Ashley always had their ups and downs before, but it's over now. Their relationship just ran its course."

The former couple were first spotted kissing each other at London's Heathrow Airport in August 2018 and were later snapped being sweet and affectionate together.

However, their relationship confirmation didn't come until June 2019. Cara Delevingne went to the TrevorLIVE Gala and shared an Instagram video kissing Ashley in honor of the Stonewall Riots' 50th anniversary, as well as their one-year-anniversary of being together.

Like Cara and Ashley, who worked together on the set of "Her Smell," which started filming in April 2018, many wonder how Kaia Gerber and Cara Delevingne have become friends.

In the past few months, the two have been making headlines for their possible relationship, spending a lot of time together this year. And it turns out, and they have one superstar to thank for having both of them in each other's lives.

A few years ago, Taylor assembled her squad to be part of the music video "Bad Blood." She asked Cara Delevingne and many other models and stars, such as Kaia's mom, former supermodel Cindy Crawford.

When Taylor won "Video of the Year" for that video, Taylor gave out mini awards to the stars of the music video, including Cindy. Kaia later joined in on the photo to commemorate the win, as well as Cara.

So perhaps it all started from there.