The 35-year-old singer posted a candid photo on her Instagram Stories, seemingly mocking how other celebrities are having full glam done, while she's at home wearing a nursing bra, pregnancy undies, and of course, hair and makeup by "@exhaustion."

She stood in the bathroom with no makeup and looks like she's exceptionally sleepy, no doubt because of the sleepless nights from having a newborn child. 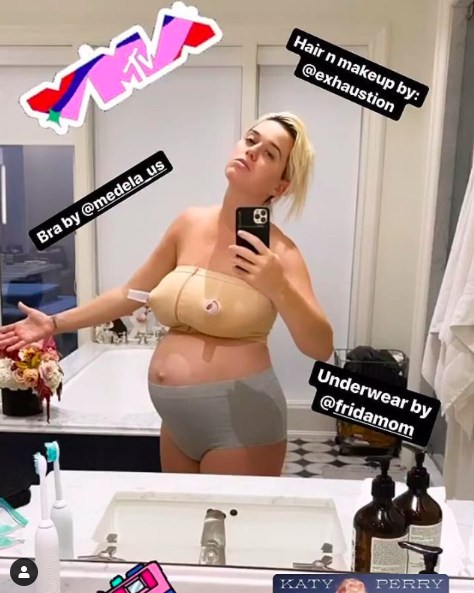 "Shout out to Katy Perry," the Brit said. "Most celebrities, when they have a baby, lie and cheat about when they had the baby, and they suddenly appear a week later looking absolutely body perfect."

He added, "They play a game where they pretend they're pregnant before they are, and the whole thing's a total scam."

"Katy Perry has come out having just given birth, and she's got her breast pump bra, her big maternity pants - Garraway style - she looks fantastic, and that's what a real mom looks like."

After five days, the picture came just after the "Roar" hitmaker gave birth to her daughter, Daisy Dove.

Katy Perry and her fiancé Orlando Bloom welcomed their daughter last week and announced the birth on their social media with a black and white snap.

The couple could be seen clutching Daisy's tiny hand just hours after being welcomed into the world.

Perry seems to have a whole new life ahead of her becoming a mom. After her heartbreaking divorce to first husband, Russell Brand, calling their marriage a "tornado."

The "Hot N Cold" singer didn't seem to have the fondest memories of her short marriage to the British comedian.

In an interview with "60 Minutes Australia" on Sunday, the 35-year-old spoke about her relationship to Brand, saying, "I was having great success at 23, 24, 25, and then I met someone interesting and stimulating."

She added, "It was just like a tornado; it was everything happening at once."

The singer added that the marriage was the "first breaking of my idealistic mind."

Katy Perry and Russell Brand got married in 2010, and after a year and two months, they split when the Brit ended their marriage over a text message.

Just before their breakup, it was reported that the former couple had already drifted apart, that they didn't even spend Christmas together, as per E! News.

With Perry generally on tour promoting her music, her absence made Brand's heart grow colder.

The comedian insists that it was Perry's overwhelming fame and work schedule that drove him away.

He also reportedly realized that he didn't want to be part of Perry's glamorous party lifestyle and luxurious image, expressing in his documentary "Brand: A Second Coming," "I'm associated with the very thing I detest: vapid, plastic, constructed, mindless, celebrity."

No matter what his reason for splitting with Perry over a text, it's his loss. Katy Perry and Orlando Bloom are getting married soon, and rumor has it that the couple may even move to London soon.

Let's just hope they don't cross paths with Russell Brand, or it will be awkward.