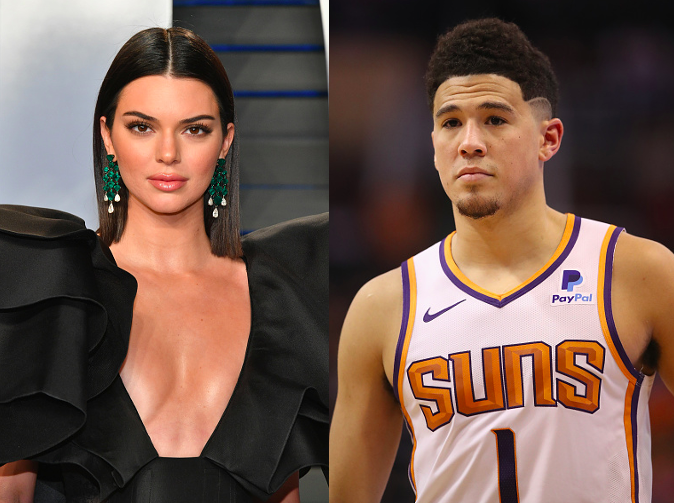 Kendall Jenner and Devin Booker were recently spotted out and about this weekend, which only fueled the dating rumors circulating between the pair.

Last week, the pair went on a group vacation with their A-list pals, Justin Bieber and Hailey Baldwin.

A source told People Magazine that the pairs were in Idaho and stayed at the Gozzer Ranch Golf and Lake Club.

"Kendall and Devin have spent the past few weeks together. They have mostly enjoyed Malibu, but they were vacationing with Justin and Hailey and Idaho over the weekend."

The couple enjoyed a lunch date on Saturday and were joined by Kendall's sister Kylie and some of her friends.

A little bit of awkward moment happened while the rumored couple is there, as People Magazine reported that the supermodel's former beau, Blake Griffin of the NBA Detroit Pistons, was also spotted at the restaurant.

On Sunday, Kendall Jenner and Devin Booker were also spotted for dinner in Malibu.

Jenner and Booker have reportedly started dating early this year, and they have recently gone public with their romance by often hitting up popular restaurants together.

In the past week, the two exchanged flirty comments on Instagram.

"Devin is lovely to her. He spends a lot of time with Kendall's family and friends too. They seem to be on the same page."

"They haven't been working lately and have been able to enjoy quiet beach outings and dinners instead. They both seem to enjoy the quiet time together."

A source told Hollywood Life, "Kylie is happy that Kendall has found someone to spend time with, and because it's hard for Kendall to like someone."

"Kendall likes Devin and enjoying his company. Kylie is not at all jealous that Kendall is seeing someone."

The insider added that it isn't only the cosmetics mogul who likes Booker, but apparently, the rest of the Kardashian-Jenner clan.

Though Kendall Jenner and Devin Booker have been spotted more recently these days, insiders close to the pair said that the reality star is not ready for "something serious," even though she and the NBA star "are having fun."

"Kendall is still saying this is still sort of casual and she sees where it goes. She has no desire to settle down with anyone anytime soon."

The 24-year-old is the "kind of girl who's very quiet, reserved and shy and takes time to get that connection."

"She likes to be at home with her dogs and be alone most of the time, so this is great for her."

Kris Jenner may be happy to get Devin Booker on board because of his earnings. In 2019, the University of Kentucky alumni reportedly made $27 million after signing a $158 million maximum contract extension with the Phoenix Suns, who he has been part of since 2015.

READ MORE: Kim Kardashian Plans to Be The Next Martha Stewart As She Expands KKW Empire