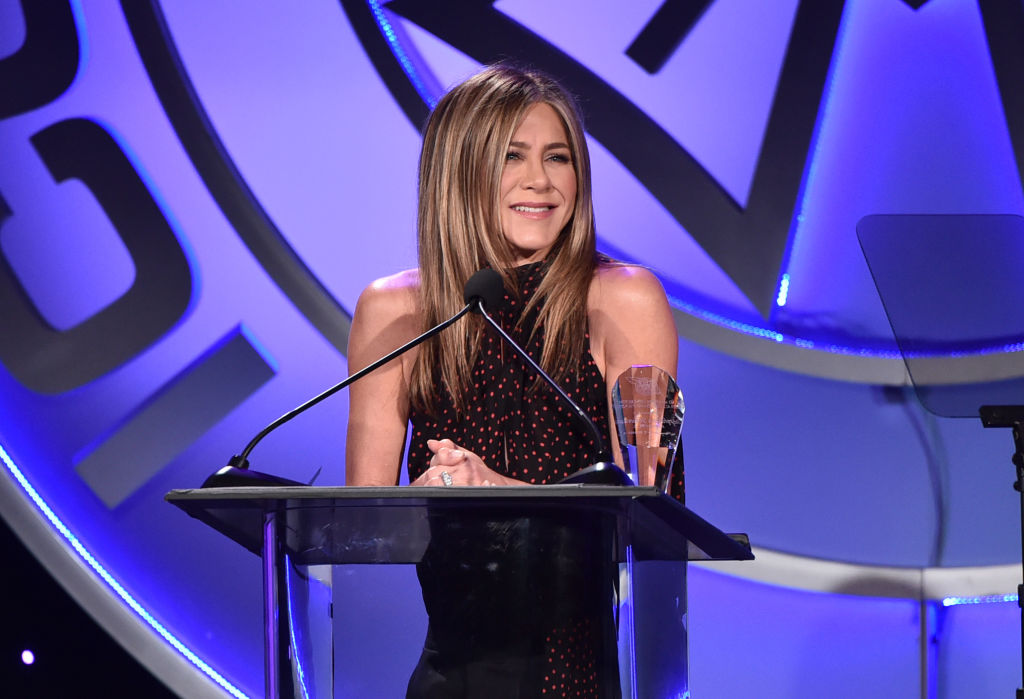 Now, the Hollywood A-lister is once again sending the internet into a total frenzy after she totally steals the show for this year's 72nd Primetime Emmy Awards. Despite losing to Zendaya on the Lead Actress for Drama Series nomination, the 51-year-old actress still proves no trophy is required to make some Emmy's noise.

During the award ceremony on Sunday, Jennifer Aniston first made noise when she graced the audience-less Emmys 2020 ceremony with Jimmy Kimmel. Jennifer went to the Staples Center to present the Outstanding Lead Actress In a Comedy Series Award while wearing a little black dress; who could go wrong with an LBD, right?

The ageless actress kept her look simple but hot by pairing the sophisticated LBD with loose waves, a silver statement necklace, and a matching bracelet.

After introducing her as a presenter, Jennifer had an awkward banter with Jimmy Kimmel as they need to stay feet away from each other to observe coronavirus social distancing protocols. Jennifer then went on to present the nominees for the said category.

But Jennifer Aniston's hotness was taken into the next level when the stage literally went on fire. Before "The Morning Show" star received the envelope to read the winner, the host, Jimmy Kimmel, took extra COVID-19 measures and sanitized the envelope.

The 52-year-old host showered the envelope with tons of Lysol and eventually threw it in a bucket and lit with fire for further "disinfection."

The "Friends" alum turned into an instant firefighter when she grabbed the fire extinguisher and put out the fire like a pro. Only "the" Jennifer Aniston could do such an act while all glammed up.

After his presenter stint, Jennifer rushed back home to tune in via Zoom for her own nomination for her Apple TV series. When it is time for Jennifer's nomination, the host checked on the actress to see if she's already home.

Donning a rose floral robe, Jennifer faced Zoom and talk to Kimmel. But in true Jennifer Aniston fashion, she is up for more surprises, and one of her longtime pals appeared on screen with her.

Apparently, her fellow "Friends" star joined her at home to witness the ceremony. The Monica Geller portrayer even joked about living with Aniston since the 1990s, as if pertaining to their famous New York apartment on the hit 90s sitcom.

"Of course I'm here, we live together," the 56-year-old Courteney Cox said.

After a few seconds, another familiar face joined the Zoom call; it was no other than Liza Kudrow, a.k.a Phoebe Buffay.

"I don't know, with your family, maybe?" Kimmel asked Kudrow, to which the 57-year-old actress responded: "Yeah, like people live with their families. That's funny."

The brief mini-Friends reunion sent Twitter into a total frenzy, but not until actor Jason Batemen joined the iconic trio.