The new series on Netflix, "Emily in Paris," has been making headlines, mostly for the wrong reasons.

In its pilot episode, "Emily in Paris" threw shade at the famous pizza institution with Emily, played by Lily Collins, quips, "Oh no, you must have gone to Lou Malnati's," after hearing her new French colleagues that they don't enjoy eating deep dish pizza.

Lou Malnati's is famous for its Chicago-style deep-dish pizza that's characterized by a higher crust edge and layers of chunky tomato sauce and lots and lots of cheese.

On Wednesday, Lou Malnati's Pizzaria released a statement expressing their disappointment of the show after likening their "disgusting" pizza to "a quiche made of cement."

Marc Malnati, the restaurant owner, called the Netflix show's dig as "heartless," since the restaurant and many others have been badly hit hard by the coronavirus pandemic.

"When Netflix's 'Emily in Paris' writers chose to take a shot at Chicagoans and our pizza to try to get a laugh, it felt heartless and not humorous in the midst of COVID-19."

They added how they enjoy friendly banter with pizza lovers from California or New York, but the comment made about their restaurant on "Emily in Paris" "feels especially unkind to disparage anyone during these difficult times."

The restaurant has been serving its famous Deep Dish since 1971.

Aside from the Lou Malnati insult, another Chicago insult was featured in the series that targeted Cubs fans, as per NBC Chicago.

Meanwhile, on Instagram, to thank fans for their support, Lou Malnati is giving away $5 off for a 4 or 6 pizza pack. 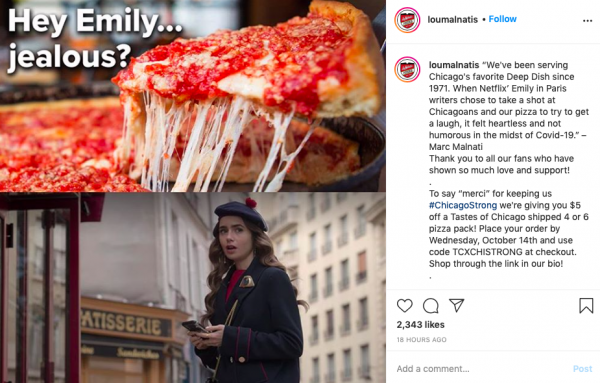 "Emily In Paris" was created by "Sex and the City" creator, Darren Star. The series premiered on October 2, 2020.

The series follows Emily, a marketing executive who travels to Paris for her "dream job."

Star explained to Entertainment Weekly why he poked fun at the American and French society.

According to the creator, he enjoyed pointing out cultural differences and explained that stereotypes exist because there's truth to them.

"I wanted to portray this character going into a world of enriching moments, and it's a comedy. We wanted to heighten them in a good-humored way. We get digs in on the other side too." 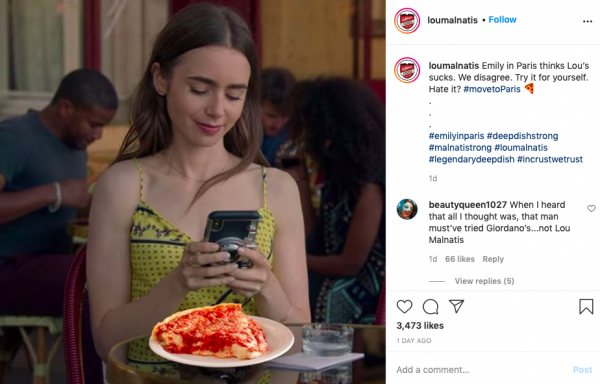 Lily Collins revealed that she was willing to do anything to land the role of Emily.

She told People magazine that the character "deeply resonated with her."

"She's a go-getter. She's skilled. She doesn't take herself too seriously. She's all these things that women and men, whatever generation, can relate to."

While some Americans seemed to enjoy the "Emily In Paris," French critics dubbed it as "embarrassing."

According to The Hollywood Reporter, there were so many "proud cultural ignorance" on the show.

"Emily in Paris" has been mocked and dismissed for the French's perpetuating stereotype and glorifying an unrealistic version of Paris.

Premiere France jabbed that the series has made French people look bad by portraying them as lazy, sexist, and have no concept of loyalty.

The series has a 7.5/10 IMDb rating and an average of 71% Tomatometer on Rotten Tomatoes.

Tags: netflix netflix emily in paris Emily in Paris lily collins lou malnati's netflix feud
© 2022 EnStars.com All rights reserved. Do not reproduce without permission.
Most Popular
You May Also Like