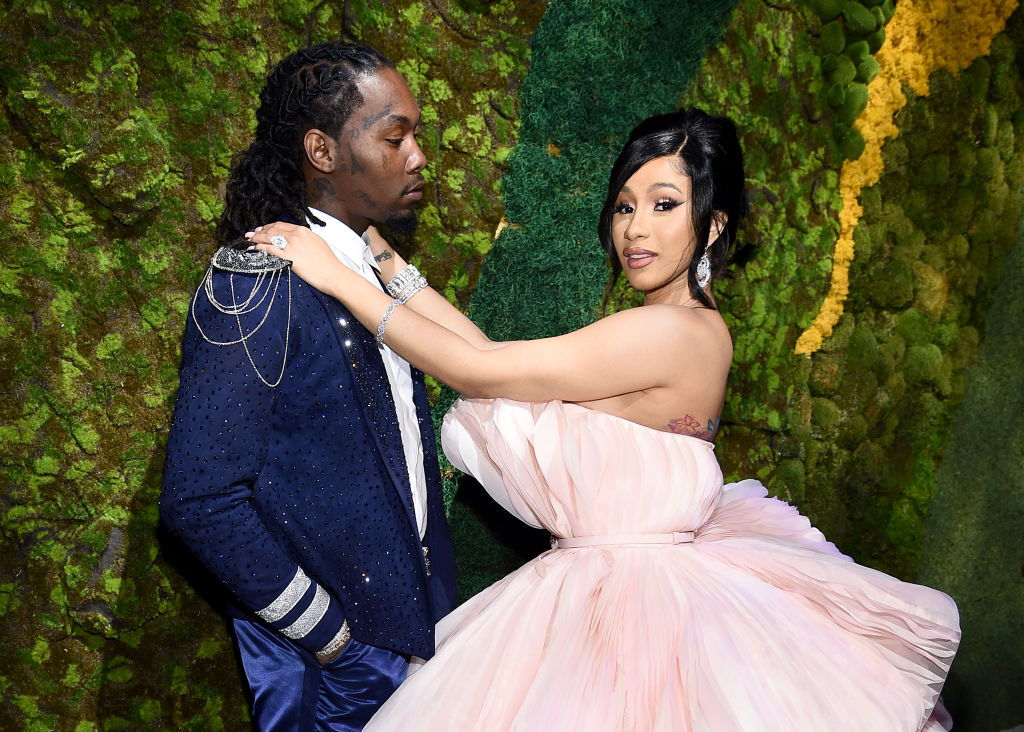 Cardi B received overwhelming love from friends and loved ones, including from Kylie Jenner and ex-husband Offset, as she celebrated another milestone in her life.

The Grammy Award winner hosted a lavish and wild party in Las Vegas for her 28th birthday.

Looking like an Egyptian goddess, the New York-born rapper -- whose real name is Belcalis Marlenis Almánzar -- sported a body-hugging dress featuring a metallic top and draped white bottom that accentuated her curves.

"28....Thank you for all the love ...More pictures posting later on!!" she captioned on Instagram as she posted a photo of her in the stunning dress.

In her Instagram stories, the mother-of-one shared a surprising gift she received from Kylie Jenner.

It appears that the beauty mogul knows how to make her friends happy, as she gave the female rapper a powder blue Hermes Birkin bag that reportedly cost a whopping $20,000.

The "Bartier Cardi" artist took to IG to thank the reality star while showing off her new luxury bag.

"Look at this Birkin. Thank you Kylie Jenner," Cardi B mentioned in a clip, adding: "Bing Bylie - she goes by King Kylie but you know we gotta B, B, B. Oooh powder blue! I know I got a bathing suit that matches this s***. Thank you!"

The "Keeping Up With The Kardashian" star previously appeared in Cardi B and Megan Thee Stallion's "WAP" music video, where Jenner faced a massive backlash and was even petitioned to be removed from the video.

Offset's Birthday Gift To Cardi B

Aside from the Birkin bag, the award-winning rapper also got a surprising present from the "Up the Smoke" rapper.

Interestingly, despite their divorce case, the "Bodak Yellow" songstress appeared to have made up with the Migos rapper. It was after she was seen lap dancing and kissing Offset in a photo obtained by E! News.

Although it was unclear whether the pair have officially reconciled and dismissed the legal case, TMZ revealed that the "Please Me" artist received a jaw-dropping Rolls Royce truck from Offset, with their daughter's name embroidered on the seats.

With her PDA-packed birthday Offset, it sent some mixed reactions on social media. Some even criticized Cardi B for reuniting with her ex.

"Cardi B lawyers after wasting time drawing up divorce documents for the 99th time," one user wrote, while the another one posted, "So You And Offset Back Together?? Once AGAIN You've Failed Us, Cardi."

Last September, news broke that Cardi B has filed for divorce from her husband, citing irreconcilable differences.

During her Instagram live, she then shut down rumors pointing out that there is a third party involved.

"The reason for my divorce is not because of none of that sh*t that ever happened before. It's not because of cheating," she mentioned at the time. "I'm seeing people be like, 'Oh, he has a baby on the way.' That's a whole fuc*ing complete lie. That's the second time people are trying to pin babies over here. No, that's bullsh*t."

Following their highly publicized divorce case, Offset mentioned in an Instagram live that he "misses Mrs.WAP."