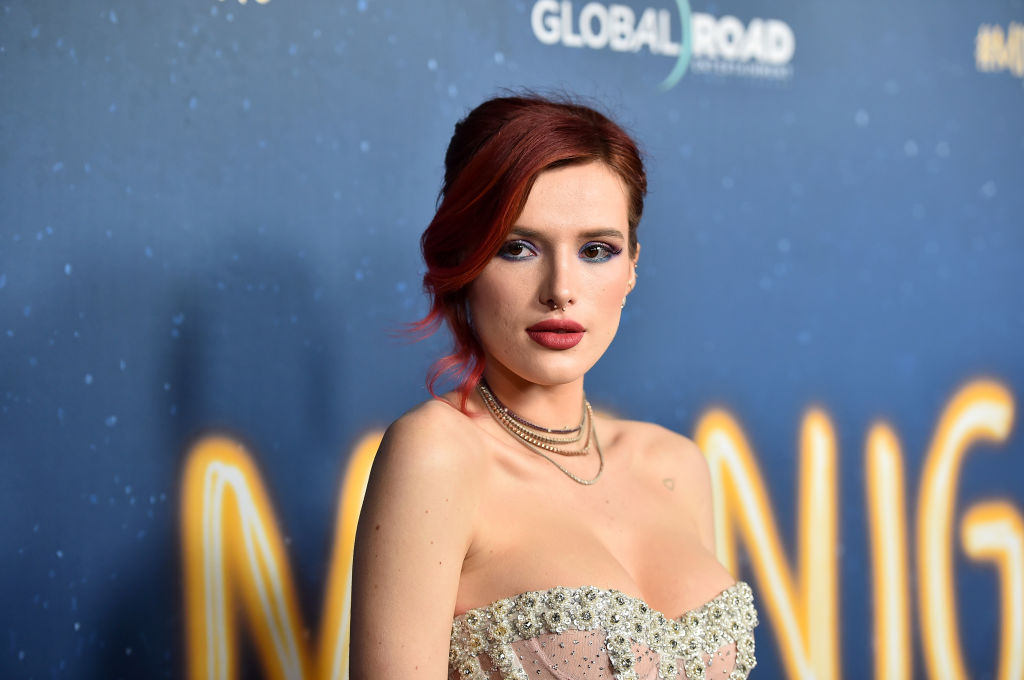 The former Disney star teased her 24 million Instagram followers with a whimsical yet sultry take on the spooky season.

Alongside her older sister, Dani, The "Midnight Sun" star stunned her fans as the duo debuted a colorful sexy fairy princess costume.

The 23-year-old actress looked mesmerizing in her jaw-dropping sheer embellished corset that exposed her nipple piercings.

She also wore satin light blue gloves and a feathered purple mini skirt that accentuated her curves, all while topping off the look with her crimped bright red hair and playful makeup.

On the other hand, the Nickelodeon alum had a different take on the fairy princess as she donned a long sleeve colorful top that matched her signature rainbow hair.

Like the younger Thorne, Dani went for a seductive pixie with her black laced lingerie over a mini pink tutu, paired with fishnet stockings and chunky shoes.

Furthermore, it appears that the duo exerted their time and effort to perfect their coordinated costumes, as both have their matchy wings and sported faux pointed ears.

With this, fans took to the comment section as they gushed about the sisters' Halloween vibe.

"you so sexy fairy Bella Thorne I love you my fairy princess I love your wing," one user wrote, while another one mentioned, "A fairytale dream come true."

An eagle-eyed fan seemed to notice that "The Babysitter" actress went braless as she pointed out her body piercing: "Ayyy Nipple piercing squad."

Meanwhile, their friends from the industry also complimented the duo's coordinated costume, including indie artist Phem, who wrote: "prettiest/ coolest outfit ever."

Moreover, Dani also took the comment section and said that she and the "Infamous" actress are "fairies for life."

Although Bella Thorne went on the safe side for this year's Halloween, the former Disney star received a wave of backlash in 2019 after being accused of glamorizing domestic violence.

It came after the brunette beauty shared a selfie on her Instagram account, donning fake bruises, bloody lips, blacked eyes, and battered face for her Halloween look.

"Hire me for your Halloween makeup I got u, boo," she captioned her post.

While some praised the actress for her realistic makeup, others called out Thorne's post as "insensitive."

"Why is glamorizing being physically abused culturally appropriate during Halloween?" a fan asked.

Another one also pointed out that the actress went overboard with her Halloween costume.

"Domestic violence is NOT a joke. Wtf would this for a Halloween costume or makeup," the critic wrote.

Although she did not respond to the issue, she later on posted another photo and wore different outfits to celebrate the spooky season.

The "I See You" star chose to dress up as a sexy girl scout while donning a white cut out top and green skirt mini skirt as she captioned her snap, "COOKIE DELIVERY."

READ MORE: The Real Reason George Clooney Backed Out of 'The Notebook' -- Revealed!