Blake Lively had a hilarious comeback after fans called her out over a poorly photoshopped Instagram post.

"The Sisterhood of Traveling Pants" star and her husband, Ryan Reynolds, shared a snap while holding their ballots as they commemorate his first time voting for the U.S. presidential election.

"It was Ryan's first time. He was understandably scared. It all happened so fast. Like, REALLY fast. He wept. I pretended to weep. Then he called all his friends. #voteearly," Lively captioned her post.

Meanwhile, the "Deadpool" actor expressed the same viewpoint as he thanked his wife for the support.

"This is my first time voting in America. I'd like to thank my wife, Blake, for making my first time so gentle and loving. It was super scary at first, then exciting, and now I'm a little tired. But proud. #VoteEarly."

The power couple shared the same photo as they stood side by side, beaming with smiles and with their ballots on their hands. 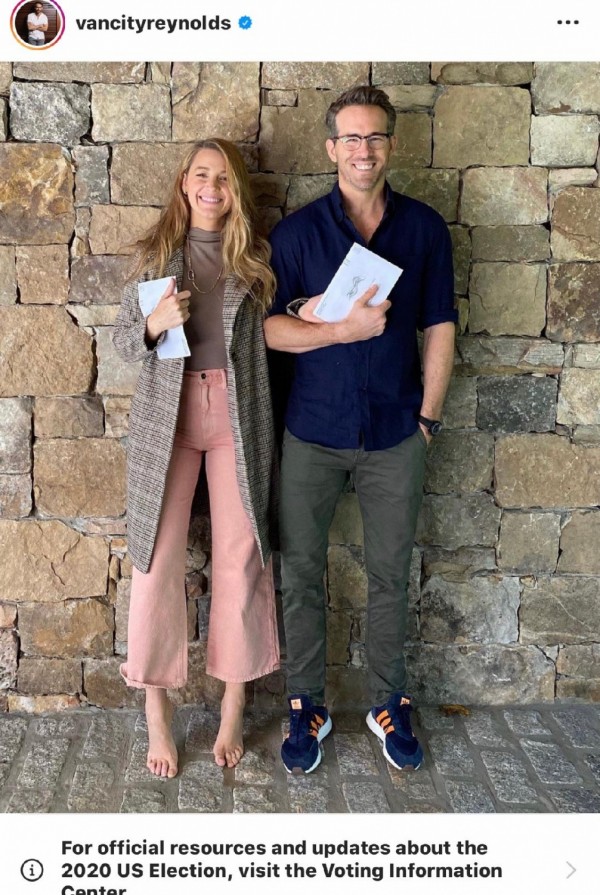 However, eagle-eyed fans noticed the difference between the two photos and called out the "Gossip Girl" star for her shoes.

Fans flocked to the comment section and pointed out the poorly edited strappy heels on her IG post.

"Look at her feet she's drawn on the heels lmaooo i love blake so much," one wrote, while another user asked, "DID YOU DRAW YOUR HEELS AND INCLUDE A RED BOTTOM I LOVE YOU."

Interestingly, others praised the mother-of-three for her unique choice of footwear.

"LOVE THE HEELS!!!" one user commented, while one fan paid more attention to her shoes than her message about U.S. voting.

Blake Lively made a round of headlines over Twitter as fans trolled her while posting side by side photos of the two.

"Dying at Blake Lively photoshopping/drawing shoes onto her feet," an individual tweeted.

Another fan also noticed that the blonde beauty tagged the French fashion designer in her post.

"Blake Lively drawing shoes on her feet and tagging Louboutin in her photo is the epitome of 2020."

However, Lively played it cool and addressed the issue over her Instagram Stories.

In one of her posts, she asked Christian Louboutin if there were any vacancies for "iPhone doodler."

Her husband also teased the 33-year-old actress and made his own version of her shoes, drawing a pair of brown booties, to which she immediately responded: "...I don't see the issue."

In the end, the "Elvis and Anabelle" actress explained the reason behind her mysterious shoes, writing, "Can you tell I was so happy to get outta a onesie and vote. Sure it was an absentee drop-off ballot with a mask covering my look. But dammit, I exercised my right to vote. And to not wear shoes that ruined my outfit."

This is not the first time that the couple trolled each other on social media.

In 2017, Reynolds paid tribute to her birthday by severely cropping out the mother-of-three, showing only her left side of the face.

Ryan Reynolds Bad Hygiene: Not Taking On New Projects And Staying Home Taking A Toll On His Life?

Ryan Reynolds is rumored to have irritated his wife, Blake Lively.

Speculations believe that Ryan Reynolds and Blake Lively are on the brink of divorce after multiple feuds, compared to what people see them with their "perfect marriage."

HE'S ALIVE! Ryan Reynolds and Peloton Made the FASTEST Commercial EVER Following 'And Just Like That' Premiere!

Ryan Reynolds has always impressed us. We can now ADD to our list of impressive Reynoldian attributes that he made a commercial in the SHORTEST amount of time we've ever heard of!

SOUND THE ALARM!! Taylor Swift's Newest Music Video 'I Bet You Think About Me' Directed by Blake Lively JUST PREMIERED!!!

THE TAYLOR SWIFT AND BLAKE LIVELY MUSIC VIDEO IS HERE!

THE SECRET IS OUT!! Ryan Reynolds Revealed Why His Relationship with Blake Lively is the BEST THING WE'VE EVER SEEN!

Blake Lively reportedly wants his husband Ryan Reynolds to retire from Hollywood; she was said to have one reason why the actor should.

Play Save The Babies!!! George Clooney Calls for an End to Pictures of his Children in Publications!

Last night, George Clooney joined the voices of celebrities calling for press sites to stop publishing pictures of his children. He sent out an open letter "to the Daily Mail and other publications."

Blake Lively took a step forward once again against a paparazzi who took a photo of herself with Ryan Reynolds and their three daughters.