A former DJ who worked on "The Wendy Williams Show" has recently spoken up about Williams' on-air behavior.

DJ Boof revealed that things are "going to play out bad" for the 56-year-old in the wake of a series of strange behaviors she displayed.

He was a long-time fixture on the show, so viewers were shocked when the 12th season of the famous talk show started without him.

Williams reportedly replaced his close friend and rumored boyfriend with DJ Suss One but couldn't acknowledge the dramatic switch.

It forced people to ask what happened to DJ Boof on their social media.

One fan called for Wendy Williams to "seriously get help," saying that her producers are simply watching her spiral.

Another fan suggested that perhaps it was why the famous DJ left the show.

But fans didn't receive any answers until last weekend. 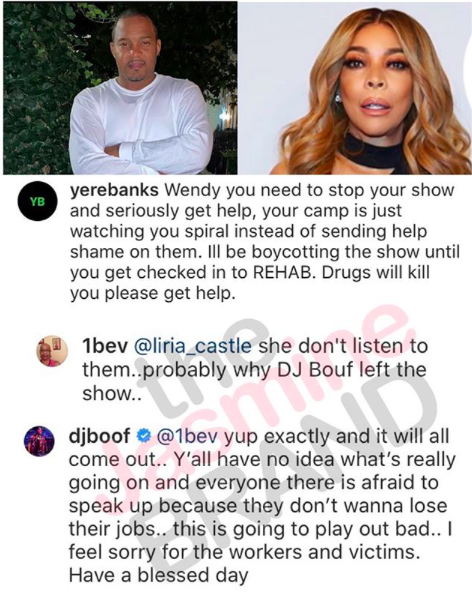 In an Instagram comment, the former associate DJ on the show said, "Y'all have no idea what's really going on, and everyone there is afraid to speak up because they don't wanna lose their jobs.. this is going to play out bad.. I feel sorry for the workers and victims."

He believes that Williams may no longer be sober.

Williams was also seen to had have difficulty breathing.

In a YouTube clip of the segment, long-time viewers of "The Wendy Williams Show" expressed concern for the host.

One person wrote, "Something is definitely off this episode. She's moving really slow and trying to keep it together. She can barely focus."

Another person commented, "I'm in shock that they would allow this to air,' adding that she 'was so uncomfortable for' the host, who spent time in a sober living facility last year."

But on Monday, she addressed her behavior after the criticism she received from DJ Boof and other social media users.

She said in an opening of "The Wendy Williams Show," "You know I come here every day, and I try to do the best that I can for you."

She added, "I appreciate you watching. But even after all these years, it still works. An effort put inf or the hour that I'm out here with you, you know?"

Williams further said, "I guess every day is not perfect, but I'm not a perfectionist. I'm not perfect."

"I do appreciate you putting in the effort to watch us, and I love entertaining you. You know? It's not easy. It is not easy. You're a tough crowd."

Wendy Williams has a long history of health struggles.

In March 2019, she revealed that she was living in a sober house with a 24-hour coach.

She told her viewers then that everyone knows she had trouble with substance abuse.

"I never went to a place to get the treatment. I don't know how except God was sitting on my shoulder, and I just stopped."

Wendy Williams, who grew up in Ocean Township, also dealt with ongoing health challenges such as Graves' disease, an autoimmune disorder that causes hypothyroidism and related symptoms.

Tags: wendy williams wendy williams relapse dj boof The Wendy Williams Show
© 2022 EnStars.com All rights reserved. Do not reproduce without permission.
Most Popular
You May Also Like

The recent "Wendy Williams Show" hosts Kym Whitley and Finesse Mitchell may have just accused Khloe Kardashian of "blackfishing" during one of their segments.

Wendy Williams Spiraling Down, Shocking Conditions After A Series of Medical Problems Revealed

Wendy Williams reportedly cut ties from all the staff of her "The Wendy Williams Show," sparking concerns that she might not go back to the show anymore.

Wendy Williams' "The Wendy Williams Show" was taped inside her $4.5 million penthouse during the early months of the pandemic to keep her daily show on the air.

Why Wendy Williams' Christmas Was 'Lonely' This Year, Source Reveals, And It's Her Fault

Sherri Shepherd Hospitalized Amid Wendy Williams Replacement Rumors; Will She Ever Return?

'The Wendy Williams Show's ratings skyrocketed when Sherri Shepherd became a temporary replacement host. However, she was hospitalized and underwent an emergency surgery recently despite being scheduled to return to the show this week.

Wendy Williams Feeling 'Totally Alone' as her Show Continues to Get High Ratings Without Her? [REPORT]

Wendy Williams' spirits are reportedly down as her show continues to get high ratings after a line of celebrity guest hosts took over her spot; could this be true?

Will Wendy Williams Ever Return To Her Show This January 2022? Here's The Truth

Fans are still waiting for Wendy Williams to sit on the purple chair again and talk to her audience like she always do in the past. Can people expect the TV host to return to her show this January 2022?