Reports surfaced on Tuesday that Brad Pitt and his girlfriend, Nicole Poturalski, have already called it quits.

But the 27-year-old model seems to be doing just fine amid the news.

Just hours after it was reported that the private couple is "totally over" after being photographed in France last August, Poturalski shared some sexy photos on her bed to her thousands of Instagram followers to see.

She captioned the sultry snapshots, "Hang in there just for a little bit longer..." 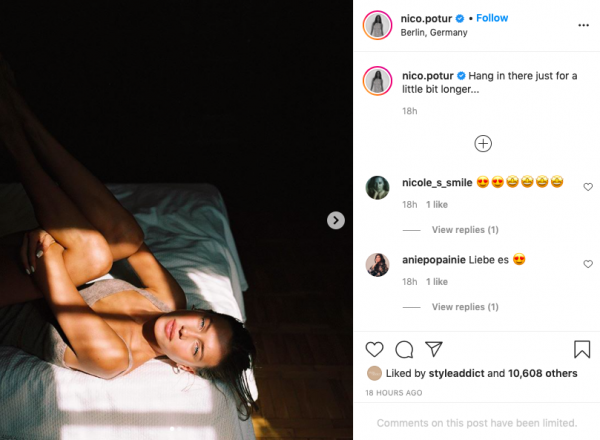 The first photo showed Poturalski curled up in the corner of a bed with her hair falling down the mattress. 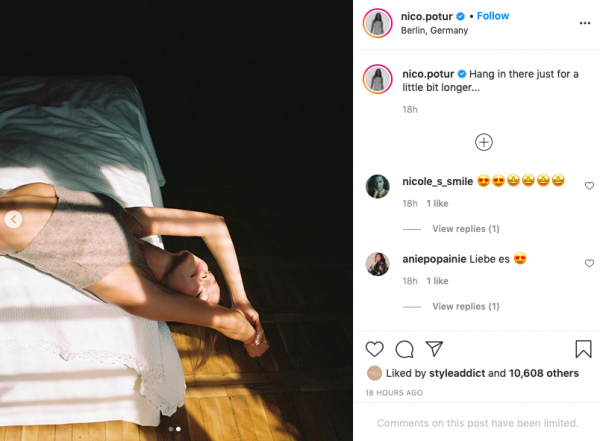 In the second photo, the German model leaned towards the back in the side of the bed as she stretched her arms out over her head.

They further added that their breakup happened "a while back."

Another insider spoke with Entertainment Tonight to confirm their split.

The source revealed that there was "something" going on between the Hollywood actor and his girlfriend, but they are no longer together.

They added that their relationship was "never a big deal."

But is this a publicity stunt?

Brad Pitt is currently embroiled in a legal custody battle with his former wife, Angelina Jolie.

It wouldn't look good for the 56-year-old dad-of-six to have a girlfriend who's close to the age of his eldest son, Maddox, 19.

Poturalski seems to be hinting to "hang in there" for a while, which could mean she should just hang in there while her boyfriend battles it out in the courtroom.

Having a new, younger girlfriend in the middle of the hearing will not only sabotage the custody battle but could make Pitt lose the entirety of it.

With Poturalski's cryptic post last month that said, "Happy people don't hate," it would be likely that Jolie expressed her disgust about it all and could use that post in the court hearing.

That perhaps Brad Pitt can't control his new girl from immaturely taking jabs at Jolie, how could he properly take care of his kids?

Things only got messier when Poturlaksi called out her haters for being rude to her online.

Nicole Poturlaski was also spotted with her husband, Roland Mary, last week. They seem to look like they've been back together when they stepped out for a dinner date in Berlin on October 23. The Daily Mail was able to obtain pictures.

Meanwhile, Brad Pitt and Nicole Poturalski never confirmed nor denied their relationship. In August, they sparked romance rumors after being spotted in France, boarding a private jet where they spent time at Chateau Miraval.

The "Ad Astra" actor and his estranged wife, Angelina Jolie, own the private estate and the vineyard that also served as their wedding venue in 2014.

READ MORE: Kylie Jenner Tells James Charles One Thing She Wants 'So Bad': 'I Think About It Every Day'

Angelina Jolie scored herself a win after her request to disqualify the private judge overseeing her divorce and custody proceedings was removed.