Kourtney Kardashian just shared an ignorant claim to her millions of followers on Instagram.

The eldest daughter of the Kardashian clan is catching flak for her eyebrow-raising claims about surgical masks' "health risks."

Speaking to her 102 million followers, she shared a post that claimed blue surgical face masks are made of "PTFE, a carcinogen made from synthetic fluoride."

PTFE, known as polytetrafluoroethylene, is a human-made chemical found on non-stick pans with Teflon coatings.

The post included an image of a blue disposable mask commonly used by medical personnel and citizens worldwide. 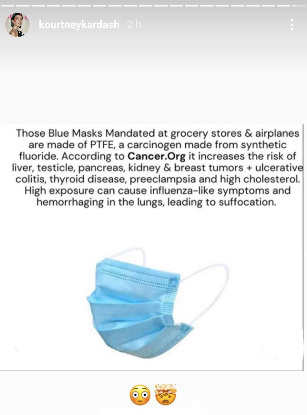 "According to Cancer.Org, it increases the risk of liver, testicle, pancreas, kidney & breast tumors + ulcerative colitis, thyroid disease, preeclampsia, and high cholesterol. High exposure can cause influenza-like symptoms and hemorrhaging in the lungs, leading to suffocation."

The 43-year-old mom captioned the post with a wide-eyed emoji and a head-exploding emoji.

Twitter and Instagram users slammed the "Keeping Up With the Kardashians" star and pointed out that she and the rest of the Kar-Jenner clan and their friends went on a tropical island for her sister Kim Kardashian's lavish birthday during the pandemic where they required their staff to wear these masks.

"Do some research before spreading misinformation to you millions of followers & also WEAR YOUR MASKS,' Twitter user @kodeerants said.

Another one tweeted, "not Kourtney Kardashian posting on her story about how masks can give you cancer."

"Encouraging 100m+ followers not to wear masks to protect them from COVID is a new low. The irony that she made staff wear masks at her privileged island party lol."

Meanwhile, there is no evidence to support the post Kourtney shared, and despite citing the American Cancer Society, a member of the organization has denounced the medical warning.

Dr. William Cance, chief medical and scientific officer of the ACS, said in a statement to the New York Post, "As a surgical oncologist, I, along with thousands of colleagues in the health-care profession, have been wearing masks for years to protect patients from the spread of infections."

On their website, there is also no evidence or anything about this PTFE, suggesting that commonly-used masks could cause cancer to people.

However, there was a research that was done that had PTFE in a compound that became harmful.

If an object is heated to about 500 degrees Fahrenheit, it will release fumes.

Kourtney Kardashian is the third Kar-Jenner member who was criticized for using their privilege and partying in the middle of the coronavirus pandemic.

Kim and her family and friends flew to a private island on a Boeing 777 to celebrate her 40th birthday.

According to TMZ, the KKW Beauty mogul picked out an island that didn't have any coronavirus case since it began.

She even reportedly asked her guests to quarantine for two weeks before the trip and even got multiple tests.

Then there's Kendall Jenner, who threw a celebrity-filled costume party amid the COVID-19.

People criticized the event, where most of the guests appeared without a face mask on.

There were allegedly signs that asked people not to post pictures to their respective social media, but Kendall's sister Kylie Jenner shared a few Instagram stories that night.

READ MORE: Ben Affleck 'Wasting Away,' Plans to Do Some Soul-Searching?