Emma Stone Gets Honest About Having Babies After Secret Marriage

Following her hush-hush wedding with Dave McCary, Emma Stone revealed that she is ready to start a family.

In her recent interview with Entertainment Tonight to promote her new film "Croods: A New Age," the 32-year-old actress said she's confident "about starting my own pack."

Shen then joked about how her future family might be way different from the Croods.

In September, news broke that the "Easy A" star secretly tied the knot with comedian and "Saturday Night Live" segment director, as r eported by Page Six.

It came after the couple has been spotted sporting matching gold bands, which appears to be their wedding ring. 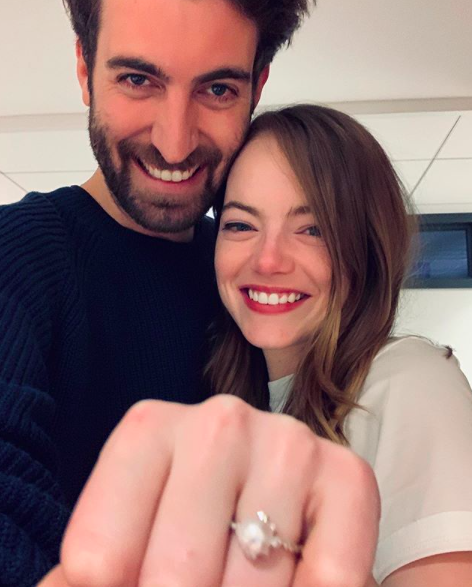 Prior to their rumored nuptials, the Oscar Award-winning actress and the 35-year-old comedian announced their engagement in December 2019 over social media.

In McCarry's Instagram account, he simply captioned the post with a heart emoji, alongside a selfie of him and the blonde beauty flaunting her massive ring with a big smile on their faces.

According to Harper's Bazaar, the "La La Land" star's sparkly "antique-style" engagement ring is made by the Tokyo-based designer Kataoka, featuring a huge 8 mm pearl, surrounded by diamonds and an 18k beige gold band.

The outlet also mentioned that the Stone's chic-looking rings cost a whopping $4,780.

The notoriously low-key private couple first met in the "SNL" set in December 2016, where the "Zombie Land" star was the guest host.

Interestingly, McCarry was the one who directed her hilarious skit "Wells for Boys," where she played the mother of a young boy named Spencer.

Although the two tried to be lowkey at their romance and veer away from the public eye, Us Weekly mentioned that Stone invited the California-born filmmaker to her roller-skating party in 2018.

The pair were spotted getting cozy as they danced and sang in Haim's set.

"At one point, they slow-danced to a somewhat upbeat song. He initiated it and she excitedly followed. They held hands [with] his other hand around her waist and hers around his shoulders."

A year later, the duo debuted on the red carpet during the Screen Actors Guild Awards in January 2019, followed by another appearance at the Oscars where Emma was nominated for Best Supporting Actress for her movie "The Favorite."

The "Crazy, Stupid, Love" actress can't escape the media's prying eyes after The Daily Mail cited that she is pregnant with her first child.

Following their secret wedding, Stone fueled the rumors after Malibu-based jewelry designer Tova Malibu posted a photo saying that she saw the actress with a "baby bump.

"So Emma Stone just walked by my house... and she has a little baby bump... I guess she's been getting cozy in quarantine - remember you heard it here first."

However, the couple never addressed or spoke about the issue.

Emma Stone dropped the truth about whether or not her character, Gwen Stacy, will join "Spider-Man: No Way Home."

For years, Disney has eyed Emma Stone as the new Cruella. This time, the actress quickly proved why the company made the right choice.

Emma Stone and husband Dave McCary are welcoming 2021 with a great news for fans.

Why Emma Stone Loves Coconut Oil in Her Beauty Routine

Even Emma Stone joined the growing coconut oil miracle believers and revealed that she tried the product for herself.

Believe it or not, Hollywood celebrities use coconut oil as a makeup remover -- and it is their holy grail!

Emma Stone, Dave McCary Show Love For Each Other After Engagement Announcement

Emma Stone was photographed holding hands with Fiance Dace McCary days after the announcement of their engagement.

The "La La Land" actress has been proposed to!