One person who's allegedly not happy with Gwen Stefani and Blake Shelton's engagement announcement is his former wife, Miranda Lambert.

According to the National Enquirer, the country songstress is convinced that her ex-husband's third walk down the aisle with the No Doubt frontwoman has "failure" written all over it.

An insider revealed that Miranda believes it's a joke that Blake is even engaged, adding, "She says Blake's simply bad to the bone and this marriage will wind up being a total disaster."

The insider further shared that after the alleged "hell" that the country musician had put Miranda through, she couldn't imagine that his life with Gwen "will be any different."

Blake Shelton's first marriage was to Kaynette Williams, and it was claimed that their marriage ended because of "inappropriate marital conduct."

Meanwhile, his four-year marriage to Miranda Lambert ended in 2015 when both were accused of cheating on one another- something that the former country power couple denied.

Soon, 44-year-old Blake took up the 51-year-old Gwen Stefani after meeting on "The Voice" and instantly clicking.

As per reports, the couple is set to say their "I Do's" in early 2021, but the engagement news surprised some of their friends after months of tension that almost tore them apart.

It was previously reported that Gwen Stefani and Blake Shelton struggled to adapt to their new multi-million-dollar home in Los Angeles after they spent months in Blake's ranch in Oklahoma.

They reportedly clashed over their nuptials with a tipster telling the Enquirer, "Blake would like to get hitched on the ranch, but Gwen wants a star-studded ceremony in Beverly Hills."

The Devout Catholic "Hollaback Girl" hitmaker is also frustrated over the church's refusal to annul her marriage to the previous Bush frontman, Gavin Rossdale.

Speaking of future kids, the source snitched to the outlet, "Miranda's amused by Gwen's desire to have a baby with Blake."

"He may be a great pal to her boys, but being a dad is a whole new responsibility. Blake won't be able to handle it," the source added.

"Friends have also told Miranda how Blake's missing and being able to do what he wants."

The source added that Blake Shelton couldn't even belch without his finacé, giving him a dirty look. Gwen has also reportedly nagged him about his beer-guzzling. 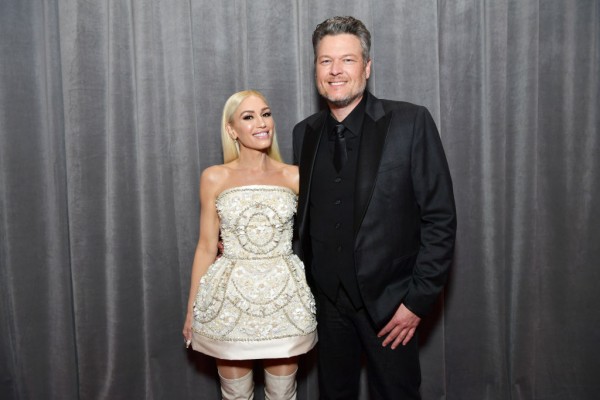 (Photo : Photo by Emma McIntyre/Getty Images for The Recording Academy)

Miranda Lambert allegedly continues to backstab Gwen Stefani for "being built on foundation of Botox and fillers, knowing Blake likes a natural woman whose beauty comes from working out, not an enhancement."

The tipster added that Miranda, who loves to show off her happiness with husband Brendan McLoughlin, doesn't expect that Gwen and Blake's marriage is going to last.

"Miranda believes Blake will want to return to the partying ways he enjoyed before meeting Gwen," the insider dished.

"She thinks he'll inevitably find the grass is greener elsewhere and leave Gwen - just like he did with her."

However, it's best to take the National Enquirer's report with a grain of salt.

Miranda Lambert may be too busy being happy with her husband to focus some negative energy on her former husband and his fiancé.

Miranda Lambert's alleged "bossy behavior" towards her husband Brendan McLoughlin has become a driving force between them and will soon result in separation.

Blake Shelton, Gwen Stefani Planning to Have A Baby But Via Surrogate?

Blake Shelton and Gwen Stefani have just married in July, but now they're finally keen to add more to their family.

After Blake Shelton and Gwen Stefani got married, reports about Miranda Lambert being the "obsessed ex" circulated online, one of which is the issue that she allegedly tried to ruin the couple's wedding over a petty reason.

Happy First Wedding Anniversary, Brendan McLoughlin and Miranda Lambert. The couple, who announced their marriage in February 2019, they celebrated their first year together on Sunday.

Country music star Miranda Lambert showed fans she isn't letting the escalating drama in her life get her down. The singer shared a post to Instagram featuring her posing happily with friends.

Miranda Lambert's new boyfriend Evan Felker reportedly ditched his wife rather harshly when the two first hooked up. The Turnpike Troubadours singer showed little respect for his partner when dealing with relationships.

Blake Shelton Finds Reactions To His ‘Karma’ Tweet ‘Funny’: ‘People Are Way Off The Mark’

Blake Shelton laughed off intense fan reactions to his vague Tweet about karma. The country music superstar explained that everybody was getting the wrong idea about it.

Miranda Lambert's ex-boyfriend went off on Twitter with no shame. He accused Lambert of cheating on him with Blake Shelton amid speculation that Lambert is dating another married guy.