Sofia Richie just posted a cryptic message on her Instagram, months after she and Scott Disick have finally called it quits.

On her Instagram stories, she shared a picture of a passage that said, "Some things cannot be fixed, not because they must remain broken, but because they are meant to be replaced with something stronger."

"Some things should not be fixed, not because they can't be, but because they are the reminder you need to break yourself for anyone ever again."

The 22-year-old model dated Scott from 2017, but they were on-again, off-again in the last few months, leading to their breakup early this year.

Sofia Richie has also posted a lot of bikini pictures in the past couple of weeks and has been going on vacations with friends.

Recently, Sofia Richie has been seen with a new beau, 27-year-old Matthew Morton.

They were first spotted in Beverly Hills when nobody knew who the guy in October.

An insider told Us Weekly that they were a couple but kept things on the down-low for the meantime.

Sofia Richie and Matthew Morton are said to be "not trying to make a big deal about their relationship or about how serious it is, but they definitely see each other."

In early November, they were also seen together enjoying a cozy lunch with some of their friends.

Mathew is an entrepreneur and the founder of Cha Cha Matcha, who also happens to be the Planet Hollywood owner Peter Morton's son.

He is also the second love interest linked to the model since she and Scott Disick broke up.

A month before Sofia and Matthew's dating rumors, she was linked to actor and close friend Jaden Smith after being photographed cozying up to one another on the beach.

But another insider revealed to Us Weekly that they are not treading into the romantic territory as they're just really good friends.

"They basically grew up together, and there's nothing romantic there."

Since the 35-year-old's breakup from Lionel Richie's daughter, the "Keeping Up With the Kardashians" star has been linked to numerous younger women, but he is reportedly dating model Amelia Hamlin.

They were first spotted together during Halloween but were also seen with a group during dining out in June. 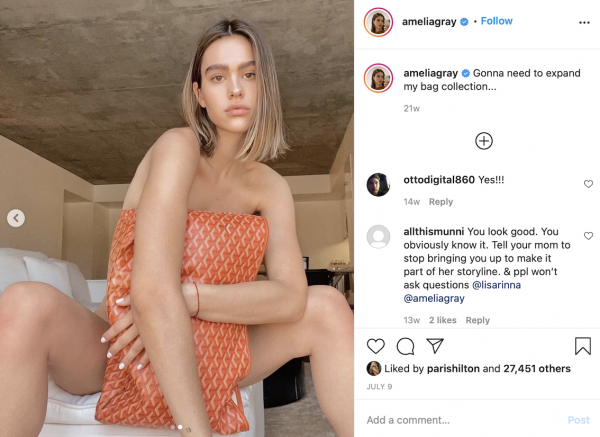 Scott Disick and Amelia Hamlin have since been spotted together dining out and walking on the beach.

Amelia is the daughter of "Real Housewives of Beverly Hills" star Lisa Rinna and her husband, Harry Hamlin.

Their relationship has sparked a lot of conversation on social media since Amelia is only 19 years old.

One person on Twitter even pointed out that Scott's son to Kourtney Kardashian, Mason Disick, is closer in age to Amelia than his dad.

But other fans just dragged Amelia's mom for a new "storyline" on the hit Bravo show "Real Housewives of Beverly Hills."

One person tweeted, "Rinna is happy because she has a storyline, once again using her daughter."

READ MORE: Brad Pitt, Lady Gaga Interested In Getting Together Professionally and Personally?

In the final part of "Keeping Up With The Kardashians" reunion, Scott Disick reveals why much-younger girls are attracted to him.

It sure looks like Scott Disick and Amelia Hamlin are more than just friends.

Sofia Richie has totally moved on from Scott Disick, as her PDA and kissing session with new BF Matthew Morton shows.

Is Scott Disick okay? The reality star was spotted "worse for wear" as he continues to go to parties with different models in the past week.

Though they are now broken up, Scott Disick and Sofia Richie allegedly had plans to get married last year.

Sofia Richie is cutting all the drama between her and ex-boyfriend Scott Disick, who was seen dating a mystery girl.

Scott Disick did not leave a good impression on Sofia Riche's family.