Kourtney Kardashian is about to say goodbye to the small screen because she's headed to the big screen.

The 41-year-old "Keeping Up With the Kardashians" star is joining her friend, TikTok star Addison Rae for "He's All That," a gender-swapped remake of the hit 1999 film, "She's All That."

On Tuesday night, Kourtney unveiled on her Instagram that she's "studying" the movie while holding what seemed to be the film's script.

She was dressed to the nines in her bed, wearing a black jacket with her cleavage and her lean legs on display. 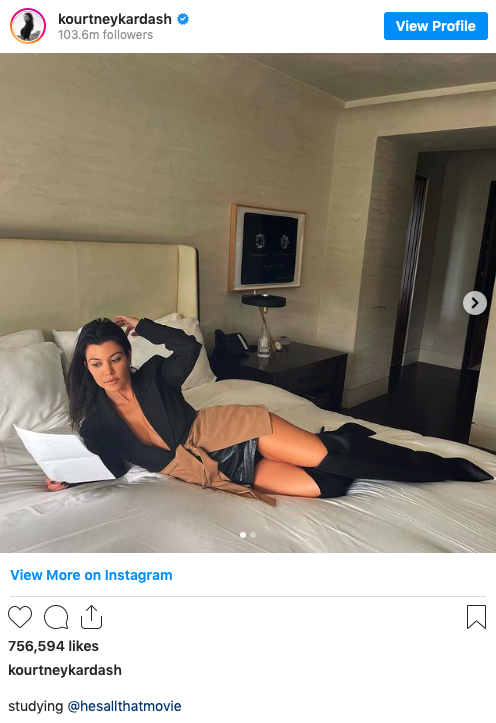 Addison commented on the post, "workkkkk," along with a red heart emoji.

Though this is Kourtney Kardashian's first movie role, the mom-of-two previously played Kassandra Kavanaugh in a 2011 episode of soap opera "One Life to Live."

Early this year, she also made a cameo and Justin Bieber in the hit FXX comedy show, "Dave."

In September, Variety confirmed that 20-year-old Addison Rae would be playing the lead role in "He's All That."

In an interview with People magazine, she confirmed how she fell in love with the original movie after her mom introduced her to it.

"When I was younger, I was constantly in acting or dance classes and always loved drama class in school."

She added, "One of the craziest parts of this year has been the ability to pursue so many of my passions - capping it off with starring in my first movie!"

Addison's character is a social media influencer who decides to turn her school's nerd into a prom king hottie after being dumped by her boyfriend.

Alongside Addison, her co-star Tanner Buchanan will be the guy who will get the makeover.

He also told People magazine how he loved that the gender roles are being reversed.

"In reality, they're both making over each other into better people, like in 'She's All That.'"

"It really holds true to the original story, but is just updated in a way that feels current- cell phones and social media are pretty integral parts of our lives now!

Addison Rae rose to fame for boasting her dance moves on TikTok to her almost 71 million followers before landing the role.

But her fame got to a whole new level when she was spotted hanging out with Kourtney Kardashian since summer. 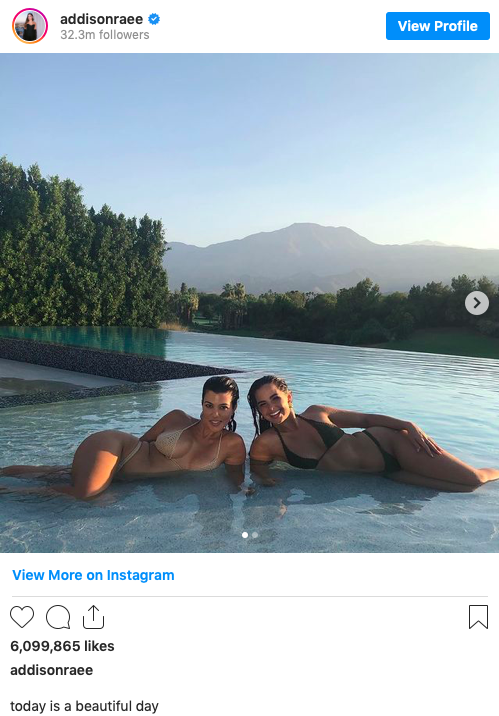 They met thanks to Kourtney's ten-year-old son, Mason Disick, who is a massive fan of Addison's TikTok videos.

In March, Mason and Addison danced to "Need a Freek," which was taken at Kourtney's house at that time.

In May, Kourtney and Addison started posting pictures with one another and even started referring to each other as "besties" by June.

She is now one of TikTok's top-earning stars, pulling in about $5 million annually.

Scott Disick was recently slammed by fans after sharing a photo of him 'working' following Travis Barker's Instagram story implying that he had a wild night with Kourtney Kardashian.

Scott Disick highlighted how bothered he was with Kourtney Kardashian's PDA with current beau Travis Barker, but nobody knew about it until another one of Kourt's ex leaked the evidence.

Kourtney Kardashian Culprit to Scott Disick, Amelia Hamlin Breakup? This Proves She Does Not Care

Did Kourtney Kardashian play a role in Scott Disick and Amelia Hamlin's breakup?

Scott Disick Embarassed to Be Exposed, Now Planning To Do This To Move On

After Kourtney Kardashian's ex-boyfriend Younes Bendjima leaked the private message Scott Disick sent him, people have criticized the "Flip It Like Disick" star for his comments about the "Keeping Up With the Kardashian" star and her new beau, Travis Barker.