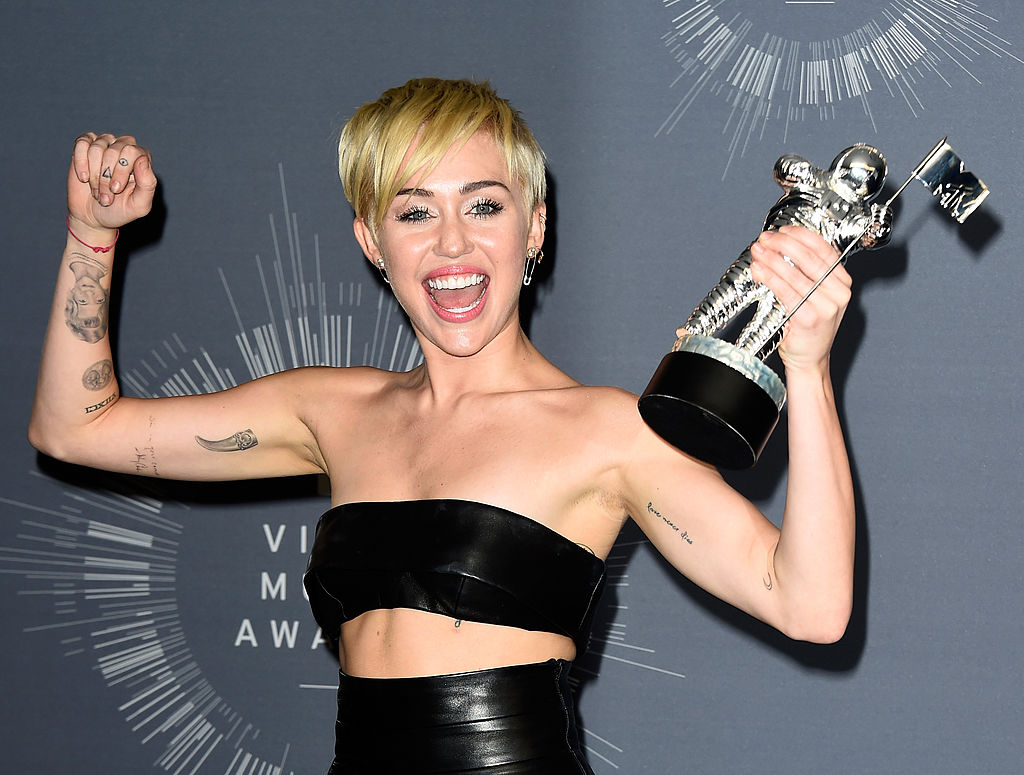 Even Miley Cyrus was surprised by the number of tattoos she has on her body.

In her recent virtual appearance on "Jimmy Kimmel Live!," the former Disney star played a round of trivia against her 20-year-old superfan named Paul.

In the game titled "Who Knows Miley?," both have to guess the answer to the trivia by raising their shoe.


The first two questions were about the singer's tattoos.

Kimmel began by asking, "What is tattooed in Miley's right rib cage?"

The 28-year-old singer-songwriter immediately raised her golden shoe but had to look at her body to check the answer.

"I got it. It's a dream catcher," she mentioned.

The veteran host continued and quizzed the two about the number of tattoos she currently has.

Paul quickly guessed "27" but was told that his answer was incorrect.

The "Midnight Sky" songstress then replied, "I have no idea," to which the host questioned Cyrus: "How do we know this and you don't?"

"The Last Song" actress candidly quipped by saying, "Um because you probably are much more coherent when I am getting these tattoos than I am."

Interestingly, Kimmel revealed the answer and told them that the former child star has a total of 74 tattoos.

In a complete disbelief, she replied, "Huh?!"

Miley Cyrus' Tattoos and Their Meanings

After her stint in her hit teen sitcom "Hannah Montana," the blonde babe veered away from her sweet gal image to having a free-spirited and unbothered persona--from her relationship drama, drastic transformation, and to her massive tattoo collection.

In her previous interview with Harper's Bazaar, she recalled having her first ink at the age of 17.

It was a phrase "just breathe" tattooed on her rib cage from way back December 2009, as a tribute to her close friend Vanessa who passed away due to cystic fibrosis.

In addition, she explained that she chose to place it near her heart to honor her grandfathers, who died of lung cancer.

"It reminds me not to take things for granted. I mean, breathing - that was something none of them could do, the most basic thing. And I put it near my heart because that is where they will always be," Cyrus said at the time.

Following this, she opted to have a bigger ink on her ribcage. The dreamcatcher tattoo on her right torso symbolizes her siblings.

"It is to protect them," she explained to People magazine.

The "Party in the USA" hitmaker has a pretty large family, most of whom are in the entertainment industry like her and her father, Billy Ray.

Her half brothers are Christopher Cody and Metro Station's Trace, while her half-sister is Brandi, who is a DJ and podcast host.

Meanwhile, the singer-songwriter's younger siblings are Braison, a folk singer, and Noah, who seemed to be following Miley's footsteps.

Moreover, the "So Undercover" star's tattoo has a very deep meaning. In 2010, she got another one in her right ear that says "LOVE."

As reported by E! News, Miley expressed her belief it is a feeling that everyone needs amid all the negativities in the world.