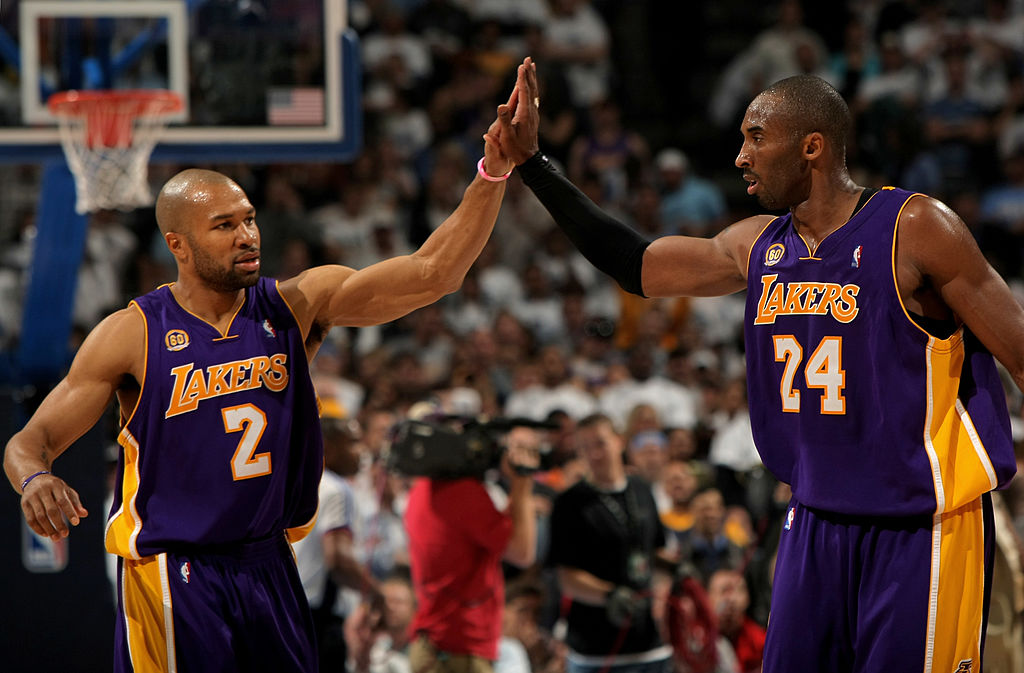 It has been one year since Kobe Bryant has tragically passed. His former teammate, Derek Fisher, is one of the many NBA stars, celebrities, family and friends who celebrated the Los Angeles Lakers legend on the anniversary of his passing.

Fisher took to his Instagram to post a heartwarming message talking about how the Black Mamba and his daughter Gianna, who was with him when he died, continue to make him happy even if they're not here anymore.

In the post, Fisher showed a series of his lockscreens featuring a smiling Kobe and Gianna. The former NBA star then shared how a single glance at his phone and seeing their smiling faces immediately brightens up his standpoint no matter what day it is and whatever he's doing.

"I often glance at my phone during a hectic day to check the time, and it's 2:24, and they're both smiling right at me like 'what's up fish?!' and instantly my perspective shits to what matters," Fisher wrote.

"Your loss and the loss of those with you on this day one year ago will leave a hole in our hearts forever."

He ended his message by saying how he misses them and continues to pray for the Bryant family, including Vanessa Bryant and their daughters.

Derek Fisher played alongside Kobe Bryant with the Lakers for several years. Their careers intertwined because they joined the same team at the same time in 1996

The now WNBA coach played a significant role in Kobe's five championships with the team, showing how precious their bond was formed when they worked together.

Tributes are pouring in on the first death anniversary of Kobe Bryant, including from NBA legends and other celebrities.

Magic Johnson, who played alongside Kobe for years for the Lakers, took to his Twitter to share a picture of them in their jerseys.

He wrote, "Kobe will always be my @Lakers brother for life."

"Black Panther" star Michael B. Jordan also paid homage to the NBA superstar and his basketball player daughter by sharing a picture of the two with a heartfelt message.

"Don't think I could recap a year any clearer from the moment I heard the news until today."

For what it's worth, Kobe Bryant's wife Vanessa reportedly doesn't want to be part of any events in memoriam of her husband and daughter.

The Lakers also have no plans to publicly mark the death of their former star player as well.

On January 26, 2020, Kobe, Gianna, and seven other passengers in a helicopter passed away after crashing on a hill in a thick foggy morning in Calabasas, California.

It has been one year since Kobe Bryant has tragically passed away with her daughter. (Doug Pensinger/Getty Images)