P!nk Shares Details on Her New Documentary, "All I Know So Far," in New Interview

Ahead of her new documentary, "All I Know So Far," singer-songwriter P!nk joined Karson & Kennedy from Audacity - sharing insights on her past and the journey she made thus far.

Airing on Mix 104.1 and on Audacy, Karson & Kennedy inquired about bits from P!nk and her new documentary, which follows the iconic artist throughout her 2019 "Beautiful Trauma" concert tour. The new document, set to drop on Amazon Prime this Friday, May 21, offers an exclusive behind-the-scenes experience of her life - as a mom, wife, boss, and performer.

"I've always wanted to run away and join the circus and now we're a circus family," Pink tells the Audacy hosts about her family traveling with her as she performs in different places. She adds that there is so much about her family experiences, describing it as being "one of a kind and unique and magical." However, while the experience of touring with her family nearby is a dream come true for her, P!nk admits that it is not all fun and games - keeping up with an incredibly hectic schedule, just like any other mother. 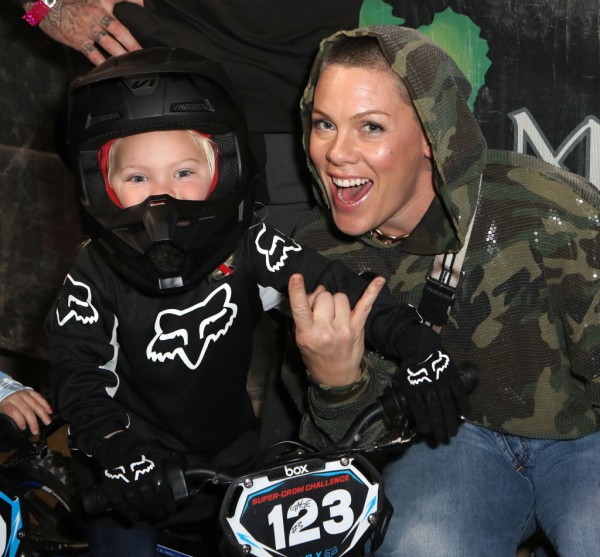 While being a traveling, performing mom is quite an uncommon experience, P!nk never forgets to instill in her own kids the importance of hard work. In fact, her 9-year-old-daughter Willow managed to pick up a job while her mom's on tour, earning her own money in the process.

"My daughter... what was cool for her was she had a job on the road this last time," P!nk excitedly shares with Audacy. She explains that Willow worked in the dancer's quick change and added that it was "adorable" seeing her daughter walk into the accounting office to receive her own paycheck.

"I miss being in a crowd, I miss sweating with strangers." she tells Karson & Kennedy.

P!nk first began performing at the age of 16 as a part of the R&B group Choice. After her group disbanded, she signed a solo recording contract and started working with hit producers of the time - Babyface, Kandi Burruss, and Tricky Stewart - and released her debut single "There You Go" by February 2000. She saw immediate success with two Billboard Hot 100 top-ten entries: "There You Go" and "Most Girls." P!nk propelled to further success with the collaborative track "Lady Marmalade" from the "Moulin Rouge!" soundtrack, which saw her perform together with Christina Aguilera, Mya, and Lil' Kim.

Listen to P!nk catch up with Audacy hosts Karson & Kennedy below:

Tags: audacy RADIO.com Pink interview
© 2022 EnStars.com All rights reserved. Do not reproduce without permission.
Most Popular
You May Also Like

Watch our Audacy Check In with GAYLE

So guess what? You know that bratty break-up song "abcdefu" that pretty much everyone has been obsessed with all Fall/Winter? Of course you do, well do you know who sings it? If not - let us make the introduction. Her name is GAYLE and she checked in with Audacy to chat all about her angsty debut single and more.

‘Bachelorette’ Alumni Mike Johnson and Dr. Bryan Abasolo of ‘Talking It Out’ List Out Their Dream Guests

On this episode of Podsauce, Dax and Alesha were delighted to have on Mike Johnson and Dr. Bryan Abasolo of "Talking It Out" to chat about life, love, and the ups and downs of it all. But first, we have some pod picks for you.

Could this finally be the year he brings home the prize? Country superstar, Dierks Bentley, is a lot of things, but one thing he isn’t is a sore loser! His nomination for 2021 CMA Male Vocalist of the Year at this year’s 55th Annual CMA Awards marks Bentley’s tenth time being nominated, but he’s never won.

Country legend Billy Ray Cyrus and Australian singer-songwriter FIREROSE caught up with Mornings With Christine & Salt on Audacy, promoting their new collab "New Day," and sharing fun stories in between.

Lizzo Opens Up on Exhaustion, Social Media, and how Cardi B Got Her Back

Lizzo is back again at the top as her latest single, "Rumors" feat. Cardi B. is currently the top rap track in the country - and she shares a lot of stories behind the new banger, in an interview with Audacy.

As the Aretha Franklin biopic "Respect" continues to pick up steam and praise worldwide, Jennifer Hudson admitted waiting for the dream role for fifteen long years.

Together with the release of her latest track "PSYCHO," multimedia icon Dixie D'Amelio caught up with Audacy host Julia in the latest Check In episode.