Chart topping, queen of TikTok songs, icon Doja Cat is now starring in a new Pepsi commercial. The commercial comes as Pepsi reinvents classic soda shop flavors such as Cream Soda and Black Cherry. It is going to premiere on television during the 2021 MTV Awards, which are happening this Sunday. These limited-run sodas are the perfect blend of nostalgia and modern influence. That becomes even more clear in this commercial starring modern icon, Doja Cat.

This modern You're the One That I Want might be giving Olivia Newton John a run for her money. Also, did a Pepsi commercial just create a new chart topper? Doja Cat's unique and very modern sound alongside the references the classic musical Grease (such as the signs for Rydell High, the outfits, the entire song), give off that perfect classic-meets-contemporary vibe that Pepsi is looking for. Also, Doja Cat singing songs from the musical Grease in a nationally televised commercial. Seems like the musical is about to make it's way into main stream culture. (I wonder who called that...) 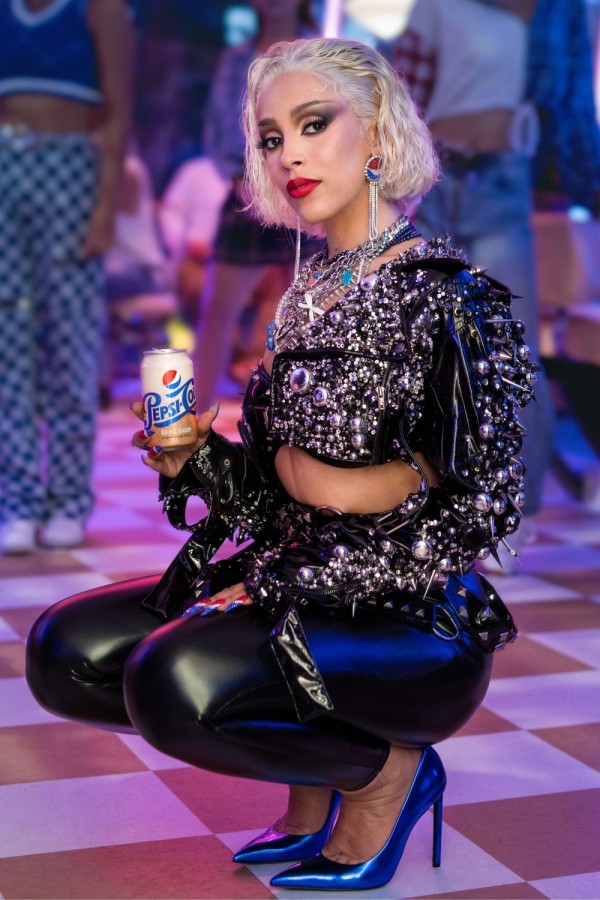 All this to say, Doja Cat is the Empress of All, get ready to get a Pepsi commercial stuck in your head, and remember to try out these limited edition Pepsi flavors!

Tags: pepsi doja cat Pepsi Soda commercial grease MTV
© 2021 EnStars.com All rights reserved. Do not reproduce without permission.
Most Popular
You May Also Like

Kendall Jenner is the latest celebrity to get crticized for remaining silent against police brutality.

Lady Doritos Unlikely To Be A Real Product?

PepsiCo confirmed that the much-discussed 'Lady Doritos' was not a real product and would likely never be a real product. The move came after weeks of Internet speculation and accusations of sexism.

Pepsi enhanced its footing in fashion with a newly launched and creative partnership with Vogue Italia.

On Sunday, an Instagram account with the name Found Hov posted a photo of a sheet of paper on the social media site with what appears to be the full lyrics to Beyonce's as-yet-released single on Sunday.

Sony Music Ireland released new music from Beyoncé in a six-second video online on Wednesday. The record company revealed the song, Bey Here Now, on Twitter that it's for a new Pepsi TV commercial.

Beyonce changed her honey blonde tresses that she is known for and lightened her hair to a bleached blonde hair coloe for her new Pepsi ad. In the image, she is channeling 60s actress Bridget Bardot with a big, tousled mane.

Beyonce might be laughing at Wendy Williams' recent unflattering remark all the way to the bank thanks to her latest business deal. Beyonce, 31, just struck a whopping $50 million deal with lading beverage brand Pepsi ahead of her 2013 Superbowl XLVII halftime show performance in February.

Katy Perry's commercial for Adidas has been released. The 26-year-old Fireworks singer dons a pair of bright pink adidas tracksuit pants and a pink and blue sports bra with matching shoes as she dances with a group of female backing dancers. The commercial also features tennis player Caroline Wozniacki, the Staatsballett Berlin ballerinas and DJ Baby G.