Okay, so that new Batman trailer happened really really fast. Between all the action shots and explosions (and really long frightening shots of a bat-shaped man walking slowly out of fire), it was hard to catch who was who and which characters popped up where - so let's break it down a bit so you don't have to keep pausing the YouTube video and squinting.

The first shot we get is a slow, easy one of a man, hunched over a cup of coffee, being arrested. As he's pulled away, we remain on the coffee, and see that it has some latte art - a question mark. The ?-flavored coffee makes it clear: It's The Riddler we're dealing with this time around.

WHO IS THE RIDDLER 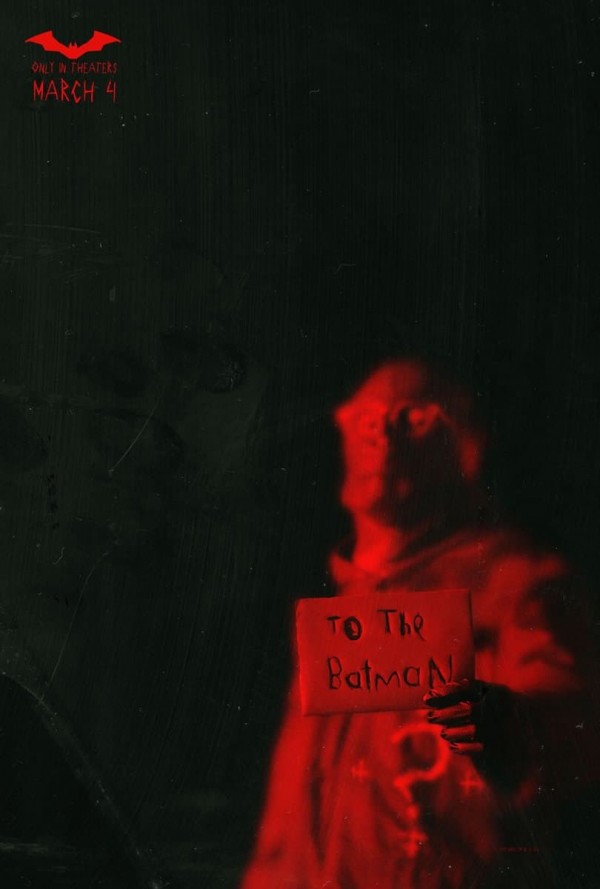 Though we didn't see his face in the trailer, here or in the scene where Batman appears to be interrogating him, we know that this brand new take on The Riddler will be played by actor Paul Dano, who has worked on such films as There Will Be Blood and 12 Years A Slave - though he is likely known best for his role as Dwayne in Little Miss Sunshine.

While previous Riddlers, like Jim Carrey's trickster from Batman Forever, have been well-dressed and quirky dapper Dans, Matt Reeve's vision took a distinct turn towards the creepy. The look of this new, cipher-obsessed villain is less one of a game show host and more one of a serial killer - in fact, much of the inspiration for this Riddler came from the famous Zodiac Killer.

Of course, the Riddler isn't the only villain we see in this trailer - we also get glimpses of two other classic Batman antagonists: Penguin and Catwoman

WHO IS PENGUIN IN THE BATMAN

Heartthrob Colin Farrell is unrecognizable as The Penguin, the iconic umbrella-holding monster mobster. They aged him up, made him piebald, and gave him a much more bloated and pitted visage - a very different transformation than the cartoonish one Danny DeVito did when he....practically became a penguin.

The transformation is incredible, but one has to ask: Does Colin Farrell KNOW he has the face of a leading man? From Saving Mr. Banks to Fantastic Beasts and Where To Find Them, he keeps playing parts where his good looks are not a factor - it's not a bad thing, but every time it happens, it gets funnier, and the complete obfuscation of his face in this trailer is the icing on the cake.

WHO IS CATWOMAN IN THE BATMAN

There was another member of the Fantastic Beasts franchise on set, though she and Farrell didn't work on the same movie - she played Leta LeStrange in the second film. Kravitz rose to fame after playing Christina in the Divergent series, and she's actually already got experience in both superhero movies and in playing Catwoman: She did the voice of Mary Jane in the Oscar-winning animated film Spider-Man: Into The Spider-Verse, and she did the voice of Catwoman in the 2017 Lego Batman Movie.

Selena Kyle has been played by a laundry list of amazing actresses over the years, from Eartha Kitt to the most recent iteration, played by Anne Hathaway. It appears that Zoe Kravitz's Catwoman is, much like her predecessor's, a self-possessed, take-what you can type who is more interested in what's good for her than the struggle between good and evil.

The romantic shots of her and Batman painted against the night sky definitely paints a picture of longing - but given that this is a trilogy, and Pattinson's iteration of Batman seems particularly unhinged, there won't likely be many romantic moments in this first film.

We also know, though we don't get to see him, that crime family boss Carmine Falcone will be played by John Turturro, an actor known for films like The Big Lebowski, O Brother Where Art Thou, and Mr. Deeds. Turturro is a versatile actor, so it's impossible to say what he'll be bringing to the role exactly, but it'll be fun to leave a little mystery for the next trailer, which is obviously what they wanted to do when they left him out.

It's not just villains we got a look at though: The trailer also featured a shot of a very different Alfred than we're used to seeing. We're going from the Classic ButlerTM played so well by the incomparable Michael Caine, to Andy Serkis, a man with a filmography that almost exclusively features action movies. This Alfred, played by the same man who played Gollum from Lord of The Rings, Snoke from Star Wars, King Kong in Kong and Caesar in the Planet of the Apes series, has a scarred face and seems like he might be a little more involved in this younger Batman's ventures.

Of course, we can't forget Commissioner James Gordon, the good-hearted police captain, and one of Batman's most important allies. We only see a quick glimpse of Jeffery Wright as Commissioner Gordon, but his performances in past roles, such as Beetee in The Hunger Games or Bernard Lowe in Westworld (both scientists and inventors), promise a quiet, thoughtful Gordon, not unlike Gary Oldman's take in the Dark Knight Trilogy.

Last but most definitely not least, we finally get to see Robert Pattinson in action as Bruce Wayne, and what we've seen should make everyone finally shut up about Edward from Twilight playing Batman.

First of all, it's worth pointing out the irony in that criticism alone, because this iteration of Batman, I'm sorry to tell you, is A LOT LIKE EDWARD CULLEN. He's dark, quiet, broody, heavily traumatized, pushes through pain just because he can (as evidence of a clip of him getting shot and looking mildly annoyed before taking the guy out), and he kind of hates himself. He's struggling against the monster that his grief and need for vengeance has created inside of him - not unlike the way that Edward struggles with being a vampire. Sorry, not sorry - Batman is a grown-up emo kid too. It doesn't lessen how awesome he is, but it is the truth.

Of course, Pattinson has also done a lot of growing since his Twilight days. He's starred in indie film after indie film, and The Lighthouse, Tenet, and The Devil All The Time all came out recently, to much acclaim, and every time critics were impressed with Pattinson's performance.

This younger, broodier Bruce is a Batman for our times: He's young, confused, and has lost his sense of identity in the world of confusion and tragedy that surrounds him. Based on his performance in this trailer, simply proclaiming when asked who he is, "I am Vengence," it's plain to see that Wayne's main struggle in this film will be finding, if you will, a sort of work-life balance: Where does Batman stop, and where does Bruce begin?

It's a similar struggle to the one you see in other, darker Batman films, but this feels rawer - every other Batman we saw wasn't a near-origin story. Taking a look at Batman, entirely unhinged in his second year of crime-fighting, will be a brand new take that will definitely inform the character's bible moving forward.
The Batman is in theaters on March 4, 2022.

Tags: Robert Pattinson Zoe Kravitz The Batman movie Trailer Breakdown hollywood Colin Farrell Riddler WHo Is Batman Who Is The Riddler Paul Dano DC Comics
© 2021 EnStars.com All rights reserved. Do not reproduce without permission.
Most Popular
You May Also Like

This morning, a behind-the-scenes photo from the set of the new' Ant-Man and the Wasp' movie surfaced online. Fans on Twitter were confused and amused by the seemingly nonsensical string of letters written as a subtitle - but there's actually a reason it was hard to understand.

Just Here To Remind You That Yes, These 8 Stars Were In 'Twilight' At Some Point

There are many reasons the whole Twilight movie franchise feels like a fever dream, but one of the biggest ones is the cast. Seriously, for real: These eight actors were all in at least one Twilight movie.

'The Batman' Spinoff Series To Focus On The Penguin's Backstory; Who Will Play The Notorious Villain?

'The Batman' spinoff series is set to delve into The Penguin's backstory, according to sources. Who will play the notorious villain?

DC Films is attempting to have a multiverse concept with "Batman," which means Ben Affleck is not totally gone contrary to previous beliefs.

Robert Pattinson Gets Devastating COVID-19 News Amid 'The Batman' Filming

"The Batman" is one of the films that have been affected by the coronavirus pandemic. This time, however, Robert Pattinson caused the postponement of the production.

“Twilight” star Gregory Tyree Boyce’s cause of death has been confirmed by authorities.

While talking about bats is a bit controversial nowadays, there's no stopping Robert Pattinson from discussing his titular role in "The Batman."

According to him, he smells a lot of crayons, which for him means he feels like he's embalmed.