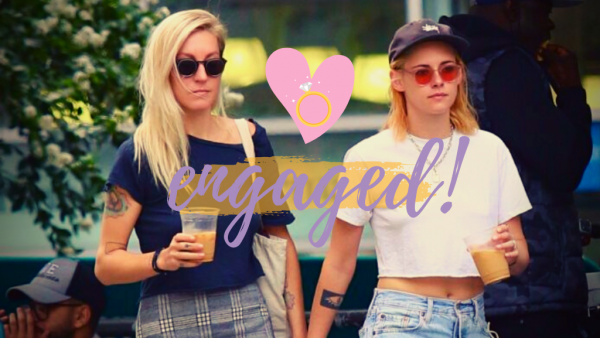 Our beloved Kristen Stewart has found her match, and she's a far cry from any sparkly vampire we may have pictured her with ten years ago. Dylan Meyer, her girlfriend of two years proposed to her earlier this week, she told the Howard Stern Show.

"We're marrying, we're totally gonna do it," she told the host excitedly.

Stewart had told Stern that she wanted to marry Meyer, and was thinking of how to propose, but apparently she changed her mind about that.

"I wanted to be proposed to, so I think I very distinctly carved out what I wanted and she nailed it....'I wasn't specific at all. It's not a given that I would be the one. You know what I mean? With two girls, you never know like who's going to fulfill what weird f***ing gender role thing. We don't do that or think about it in those terms. She just grabbed that bowl and made it happen. It was f***ing so cute."

YEAH, IT SOUNDS F***ING SO CUTE! (Don't mind my fangirling, I'm just very bi, this is so adorable it's killing me, continue with your article.)

It makes sense that Meyer would craft the perfect proposal, given that she's both a screenwriter and an actress - her most recent credit is writing the screenplay for Amy Poehler's Moxie!, a film about a highschooler who creates a feminist magazine at her school. (Although I am seriously wondering how she proposed with a bowl.)

Stewart and Meyer met on a set six years ago, but reconnected at a party in 2019. According to Stewart, it was love at first sight:

"The day that I met her, all bets were off," Stewart remembered. "I was like, 'Where have I been and how have I not known you?' She's been, like, living in LA alongside my life somehow but not ever converging?"

Stewart also apparently told Meyer she loved her at a "shitty bar" two weeks after they met (which is also killing me - ok, I swear I'm done). She told Howard Stern: "Her friends were there or whatever. They walked out and I was just like, 'Aw man, I'm so f--king in love with you.' Like, done."

Best wishes to the happy couple - I literally cannot wait to see those wedding photos.

Tags: Kristen Stewart Dylan Meyer
© 2022 EnStars.com All rights reserved. Do not reproduce without permission.
Most Popular
You May Also Like