SOUND THE ALARM!! Taylor Swift's Newest Music Video 'I Bet You Think About Me' Directed by Blake Lively JUST PREMIERED!!!

THE TAYLOR SWIFT AND BLAKE LIVELY MUSIC VIDEO IS HERE!

That sentence alone is enough to make anyone that was a middle school girl in the early 2000s faint.

As the past week has shown us, Taylor Swift cannot be stopped. Her magnetic power that has kept her at the top of the charts for over ten years is only amplified when she teams up with similarly unstoppable Gossip Girl superstar Blake Lively. The singer and the actress teamed up, creating a mega-power team of blonde awesomeness, to create a music video to Taylor Swift's phenominal song I Bet You Think About Me. This song came out with Friday's release of Red (Taylor's Version). The song is from the vault: just another never before heard jewel on an already fantastic album. The highly anticipated music video will mark Lively's directorial debut. After her comprehensive career in front of the camera, the dynamic nuance she brought to the other side is brilliant but not surprising.

Swift and Lively have been friends for many years. Back in 2015, Lively was accused of "throwing shade" at the singer, but the star quickly cleared up.

Umm whoever thought I was throwin shade clearly doesn't know I have a 'Taylor Swift Please Be My Wife Voo Doo Doll' #obsessed Look how rad she is here making my niece Heather feel like a rock star...Love my Canadian family almost as much as I love Taylor Lively. I mean Swift. Ok, FIIINE we can hyphenate our last names. Xo Blake Swift-Lively 4eva.

I wonder if Ryan Reynolds knows there's this much competition? In a true testimate of friendship, Lively came to support Swift when she appeared on Saturday Night Live for her fifth time on November 13th. Those are some best friend goals. 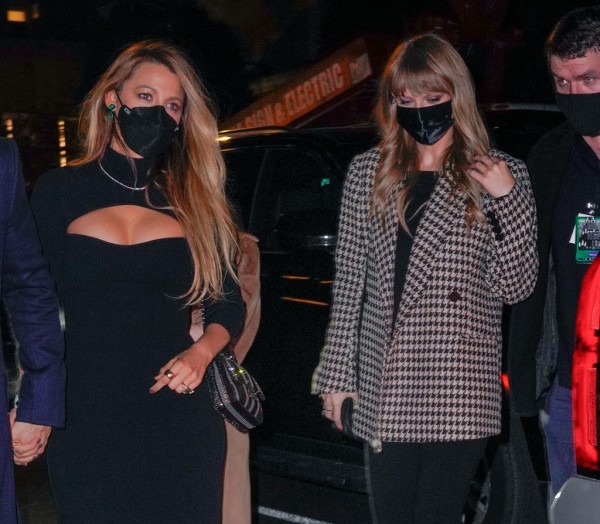 Regardless of Renolds, Swift was thrilled to have Lively as the director on this newest project. The mega-talent took to Twitter saying, "SURPRISE! NEW MUSIC VIDEO TOMORROW at 10am ET I finally got to work with the brilliant, brave, & wickedly funny @blakelively on her directorial debut. Join us as we raise a toast, and a little hell." The video depicted in the tweet, whcih was also similarly tweeted out by Lively, perfectly encapsulates the aura of the two stars: beautiful, peaceful looking, but powerful to the point of danger. We are OBSESSED!!

SURPRISE! NEW MUSIC VIDEO TOMORROW at 10am ET 🚨 I finally got to work with the brilliant, brave, & wickedly funny @blakelively on her directorial debut. Join us as we raise a toast, and a little hell. https://t.co/Gm4xT1vuNk pic.twitter.com/2Qh7KEVUpD

These women are absolute inspirations and have created something unforgettable. BRB. Off to watch I Bet You Think About Me one MILLION times.

Tags: Taylor Swift Blake Lively red Red (Taylor's Version) I Bet You Think About Me Ryan Reynolds Saturday Night Live
© 2022 EnStars.com All rights reserved. Do not reproduce without permission.
Most Popular
You May Also Like

Did Joe Alwyn Propose to Taylor Swift? Couple's Friends Predict Their Engagement after Their Three-Day Holiday

Rumor has it that Taylor Swift and Joe Alwyn might return home as an engaged couple after their short three-day holiday in the UK.

THANKS JAKE GYLLENHAAL!! Twitter Thanks Gyllenhaal for His Art-Inspiring Villainy Which Led to 'Spider-Man: No Way Home' and 'All Too Well'

Twitter is all a-flitter showering Jake Gyllenhaal with the most balanced combination of hatred and thanks we have ever seen.

Gwyneth Paltrow recently released a holiday advertisement for her business venture 'Goop' and her gift for Taylor Swift had fans laugh out loud online.

Michael Shannon is officially joining the cast of the upcoming limited series George and Tammy.

Prince William Recalls The 'Cringing' Moment He Did With Taylor Swift: 'I Got Up Like a Puppy'

Speaking to his Apple Music Plus collaboration 'Time to Walk,' Prince William recalled the time when Taylor Swift asked him to go on stage with Jon Bon Jovi to sing.

Almost a month after Taylor Swift released the 10-minute version of her song 'All Too Well' accompanied with a short film, an insider spills Jake Gyllenhaal's true feelings.

What Do Taylor Swift, Guns N' Roses, Meatloaf, and David Bowie Have In Common?

And no, it's not just that they're all singers. Taylor Swift just broke not one, but two major Billboard records in one fell swoop this week - one of them by exactly one second.