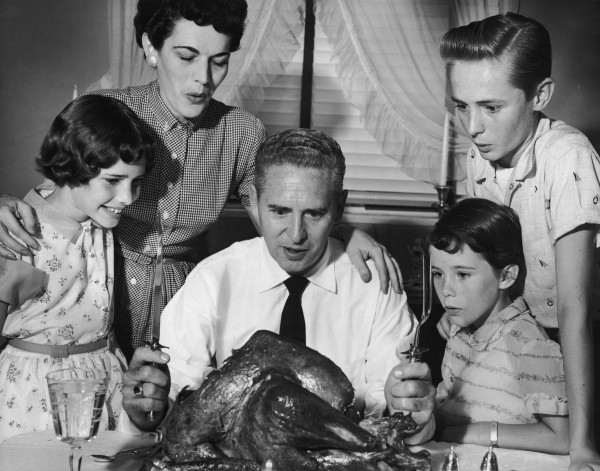 The holdiays are vast approaching. For some this is a time of fun, food and family. For others it's not quiet the pitcturesque Norman Rockwell painting we all dream of. If you're looking for a few flicks that don't remind you of the onslaught of shopping, cooking, and Aunt Mable's 6-layer Ambrosia Salad, we got you covered.

If you think trying to talk to your family during holiday dinner is tough, might we recommend Pontypool. Based on the book Pontypool Changes Everything, the film revolves around a small-town Canadian radio station where DJ Grant Mazzy and his producer Sydney Briar are forced to barricade themselves in from the threat of a zombie-like virus outbreak that is possibly passed through human speech patterns. The claustrophobic, almost stage play atmosphere works well to ratchet up the tension while those trying to get in speak in off putting gibberish. Not far off from trying to decipher your wacky uncle's bourbon-soaked political rants while you finish up that second helping of pumpkin pie.

Pontypool can be streamed on Amazon Prime.

Much like so many family gatherings, controversial topics might arise and there will be a lot of cleanup when all is said and done. Mother! from director Darren Aronofsky might start an argument. It certainly did when it was released. The film is about a newlywed couple whose lives are turned upside down when the husband allows some unwanted guests to take over their happy home. Seen as an allegory for Mother Earth and our disrespectful treatment of our home by the masses, this polarizing film stars Jennifer Lawrence, Javier Bardem, Michelle Phieffer, and Ed Harris, though be prepared for one of the most disturbingly raw performances by Lawrence that left the audience both booing and giving a standing ovation when it premiered a the Venice Film Festival. Kind of like the reaction most households have to canned or fresh cranberry sauce.

You can watch Mother! on Amazon Prime, Hulu, and Paramount+.

Sometimes going from one holiday gathering to the next can make you feel like you're trapped in an endless loop with no escape. Well, Vivarium has you covered in that department. When a newly married couple (Imogen Poots and Jessie Eisenberg) decide to look at perspective houses to start their new life together, they find themselves trapped in a maze of identical houses, with no means of escape. This surreally creepy film will have you happy to be at even the most trying of family get-togethers.

Vivarium is available on Amazon Prime.

Paul Dano and Daniel Radcliff star in this quirky gem about an oddball (Dano) who is stranded on a desert island with a dead body (Radcliff), who eventually befriends and uses to escape. Wrapped in gallows humor and a steady stream of flatulence from a bloated Daniel Radcliff, the twisty climax really carries a strong impact. Maybe not as strong as the flatulent impact of Cousin Rubin might have after the three-bean casserole on Turkey Day, but pretty strong.

Swiss Army Man is on Amazon Prime, Hulu, and Showtime.

Because one of the most commonly asked questions at family dinner is "How is work going?", just be glad you don't have LaKeith Standfield's job in Sorry To Bother You. Hired as a telemarketer for a soulless corporation, a Black phone operator learns how to change his position in the company by using his 'white voice' to drum up customers. Recognized by the racist higher-ups, this darkly satirical look at the evils of corporate America has one of the most insane endings put to celluloid in, well, maybe ever. With powerful performances by Standfield, Tessa Thomson, Stephen Yuen, and Danny Glover, just to name a few, Sorry To Bother You is a brilliant first outing by writer/director Boots Riley.

Sorry To Bother You is streaming now Amazon Prime and Tubi.

No matter how out there you think your family is this holiday season, nobody brings the crazy quite like Nicolas Cage. Mandy is one of those rare comeback films for Cage where he gets to take his performance for a beyond surreal walk. When Red Miller's (Cage) girlfriend Mandy (Andrea Riseborough) is killed by a local cult leader and his drugged-out minions, Red embarks on an over-the-top rampage of revenge, unlike anything you have seen before. Steeped in visceral imagery and ultra-violence, Mandy makes Black Friday crowds look like a day in the park.

Mandy is available on Amazon Prime and Sling TV.

You thought it was rough still sitting at the kid's table while you're in your teens, then How I Live Now will be somewhat relatable. Saoirse Ronan stars as a bratty American girl who is sent to spend time with her extended family in the English countryside. Suddenly, she is thrust into adulthood when a war breaks out leaving her and the rest of the children at the cottage alone to fend for themselves. Co-starring Tom Holland and George MacKay, This Is How I Live Now is an interesting look at coming of age in times of turmoil.

This Is How I Live Now can be found on Amazon Prime, Tubi, Vudu, Crackle, and Pluto TV.

If you ever wanted to keep those infamous holiday pounds in check, might we suggest the Netflix film The Platform? Keep in mind, afterwards you might never want to eat again. In an undisclosed facility, a prison is built where each cell is a round room with two prisoners and a large hole in the center. Each day food is given to each floor by way of a platform for two minutes a day. As the food platform descends from top to bottom, the lower floors scrounge for what is left after everyone on the higher floors has had their gluttonous fill during the allotted time. Be warned. The scenes of people eating might have you not asking for seconds at your next holiday gathering.

The Platform is available to stream exclusively on Netflix.

Tags: netflix Hulu Movies Tubi Paramount
© 2021 EnStars.com All rights reserved. Do not reproduce without permission.
Most Popular
You May Also Like

Carole Baskin is speaking out after Netflix countered her lawsuit and she explained how producers of 'Tiger King' decieved her in the second season of the show.