'King Richard' is King of HBO! The Movie About Serena and Venus Williams Staring Will Smith Achieved an Unbelievable 100% Completion Rate on HBO!

King Richard is turning out to be the King of HBO. The new movie following the incredible true story of Serena and Venus Williams staring the incomparable Will Smith is garnering not only high viewer rates but high retention rates. 707K households in the United States streamed the incredible new film this weekend, and, even more amazingly, the film had a 100% view completion rate. For a movie that is two hours and twenty-four minutes long is no small feat. It speaks to the triumph of the film: being gripping and captivating from beginning to end. Typically longer running movies have a lower retention rate, given the waning attention spans of most people, but King Richard manages to stand out as the exception to the rule. 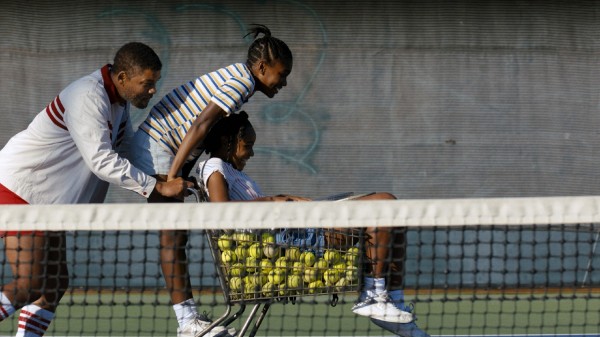 The nature of content, especially content that is streamed directly to people's homes, is that there will be a number of interruptions. Andy Forsselle, the HBO Max Head, said to Deadline, "There are a lot of reasons in an on-demand world you'd have interruptions, and that clearly didn't happen with this movie...There's a strong output here with this movie that's distinctive versus other day-and-day event titles, which are effects-driven...That strong word of mouth is jet fuel, and it's multiplied by people talking about the movie." The positive buzz that has surrounded this movie got people sitting down and watching it. The high quality of the cast and production are what kept people in their seats.

Make sure you check out King Richard as soon as you can- preferably before Thanksgiving. At this rate, you'll be the only one at dinner who hasn't seen it.

Tags: King Richard Will Smith hbo Richard Williams Serena Williams venus venus williams
© 2021 EnStars.com All rights reserved. Do not reproduce without permission.
Most Popular
You May Also Like

We're seeing a lot of Vaughn Hebron these days. Not only is the actor starring in the Paramount+ revival of "The Game," but Hebron is making an appearance in "King Richard," the biographical film about Richard Williams' efforts to support and shape Venus and Serena Williams' tennis careers. The film has been generating a lot of Oscar buzz, particularly around Will Smith's performance as the Williams patriarch. Recently, Enstarz got the chance to sit down with Hebron as he dishes on what it was like to be on set with the legendary actor, and what he's learned from Smith.

Can You Tell the Difference? Pictures of the Real Serena Williams and Venus Williams vs. Pictures from the New Movie 'King Richard' Starring Will Smith!

Here are some pictures of the real life Williams family alongside stills from the new movie King Richard.

Shaping the Next Generation: Saniyya Sidney Shares Will Smith's Advice On Building Relationships On Set

Rising film star, Saniyya Sidney recently shared in an interview with W Magazine Will Smith's heartwarming advice to her while on the set of "King Richard." Smith, who plays Richard Williams, the father of Sidney's young Venus Wiliams, was an inspiration to the young actress, who said, "I love, love, love how big of a heart Mr. Will has."

Will Smith Opens Up TO Jimmy Fallon About The Pressures Of Portraying Richard Williams Along with Other, Still Living, Icons.

Playing Famous Father Of Tennis Champs Venus And Serena Williams Was A Daunting Task According to Will Smith.

Recently, I had the chance to sit down with Vaughn Hebron, star of the season ten revival of "The Game." In this candid interview, the up-and-coming actor spoke about everything from growing up as the eldest of nine kids, to how he pivoted from being a pharmaceutical rep to actor, and finally to his experiences appearing in Tyler Perry's "The Oval," the upcoming season of "The Game," thriller "The Devil You Know" with Omar Epps and Michael Ealy, and the Will Smith-led "King Richard," the film about how Venus and Serena Williams' father helped build his daughters' tennis careers. Hebron's career is certainly on fire!

The newest trailer for the upcoming film King Richard has just been released, and if we were inspired by the last trailer, we now feel like we could conquer the world.

Will Smith In HUGE Legal Trouble Because Of THIS!

Hollywood actor Will Smith is currently facing a lawsuit alongside Warner Bros. for their upcoming film "King Richard."