During a new interview the "Dangerous Woman" singer spoke of her current romance with Ricky Alvarez, and as she gushed about her new love, she seemed to hint that her relationship with the rapper wasn't healthy.

“We’re happy. I’m a very happy girl,” Grande told Billboard Magazine, according to a report by Hollywood Life on Thursday. “I have a healthy life right now, and I think that’s all anyone cares to know. The end.”

Grande didn't mention Big Sean by name, but she did speak of her frustrations regarding relationship news overshadowing artists' careers.

"I'll never be able to swallow the fact that people feel the need to attach a successful woman to a man when they say her name," Grande said, according to a report by E! News. "I saw a headline—draw your own conclusions [on the subjects] because it'll be so much drama that I don't want—they called someone another someone's ex, and that pissed me off."

"This person has had so many great records in the last year, and she hasn't been dating him forever. Call her by her name! I hate that. Like, I'm fuming. Sorry...Don't get me started on this s--t," Grande added without revealing who it was that she was refering to.

Grande also spoke of sexism in the industry.

"If you're going to rave about how sexy a male artist looks with his shirt off, and a woman decides to get in her panties or show her boobies for a photo shoot, she needs to be treated with the same awe and admiration," Grande explained. "I will say it until I'm an old-ass lady with my tits out at Whole Foods. I'll be in the produce aisle, naked at 95, with a sensible ponytail, one strand of hair left on my head and a Chanel bow. Mark my words. See you there with my 95 dogs." 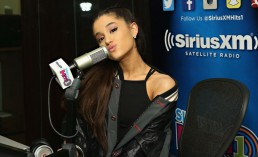 TI And Tiny Kids: Rapper Spills That This Actress Is Pregnant [VIDEO]