Aaron Rodgers' brother, Jordan, may get engaged during tonight's finale of The Bachelorette, but what about his brother's relationship status?

As Jordan attempts to win Jojo Fletcher's heart, Rodgers is currently working out with his tean, the Green Bay Packers, in preparation for the upcoming 2016-2017 season, and as he does, his relationship with actress Olivia Munn appears to be going strong.

Although Rodgers and Munn are currently busy with their careers, they continue to co-parent their dog, Frank Rodgers, aka Frankie, and on Instagram, Munn regularly shares photos of the pup, who they welcomed into their family this past May.

Along with the latest photo of Frankie, Munn wrote, "Just one paw on Dad at all times."

While Rodgers and Munn have faced rumors of an engagement for months, they don't appear to be engaged quite yet and during an interview in February, Munn shot down the reports.

"Well, I'm wearing a ring on my left hand right now, but as my publicist, Marcel, will say, 'When people ask, 'Why is she wearing a ring on her left ringer?' he says, 'because she has a finger there!'" Munn explained to Entertainment Tonight.

"No, [it's not an engagement ring]," she continued. "The other day I was eating… I had been eating too many salty foods, so it didn't fit. It's my emerald ring that I wear all the time on my right hand and I had to put it on my left because my right hand was getting too swollen!" 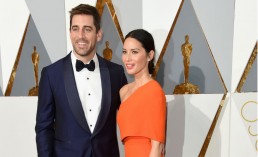 Aaron Rodgers, Olivia Munn News: Athlete Did Something 'Really Sweet' For His Girlfriend Before Oscars [VIDEO] 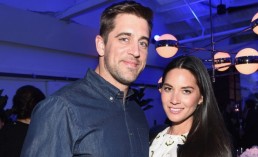 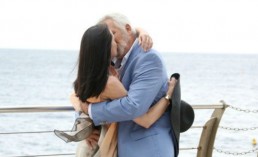