David Beckham and his wife, designer and former Spice Girl Victoria Beckham, have been facing rumors of a divorce and possible cheating for the past several months, but on Instagram, you wouldn't know it.

As rumors swirl in regard to a potential split, David took to Instagram, where he joked about himself and his wife with a funny photo of their wax figure.

"Thank you to Nicole and everyone at Madame Tussauds for letting me meet this lovely couple and showing the kids around... ( slightly hairier ) myself not my wife," David captioned the photo below.

David and Victoria got married in 2014 and share four children together, daughter Harper Seven and sons Brooklyn, Romeo James and Cruz David.

Just weeks ago, a report surfaced claiming David and Victoria had engaged in a fight after tensions arose at a friend's birthday party.

“Victoria clearly wasn’t enjoying the party so David suggested she go home,” an insider revealed to Closer magazine, via OK! Magazine, explaining Victoria was “jealous” about the attention her husband had gotten.

“Victoria feels completely on edge at the moment,” added the insider 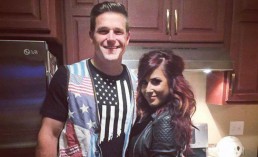