Emily Blunt and John Krasinski reached another milestone in their relationship as they are set to share the big screen for the very first time. Known as accomplished actors in their own right, the upcoming movie of the Hollywood couple is another example for couple goals.

According to Today, Emily Blunt and John Krasinski will top bill the movie "A Quiet Place." It is still unknown if the said movie will include romance in its storyline but it has been confirmed that the main plot will fall in the thriller genre. The story will center on a family who lives on a big, rambling farm terrorized by evil.

According to Mail Online, "A Quiet Place" is dubbed as a paranormal thriller. While this may seem a bit off for the fans of Emily Blunt and John Krasinski who were hoping to see them in a rom-com, seeing the two together on the big screen for the first time is considered to be a bonus. Filming for the said movie is expected to begin this fall 2017.

Krasinski is reportedly planning on re-writing the original script and directing "A Quiet Place," which would not be the first time for "The Office" actor as he had already directed two films in the past - "The Hollars" and "Brief Interviews With Hideous Men." According to reports, Krasinski and Blunt are very excited to be working on a film together. Technically, Emily Blunt and John Krasinski have worked in a film together, but only as voice actors in the upcoming animated movie, "Animal Crackers."

While "A Quiet Place" is still in the pre-production stage, Emily Blunt and John Krasinski are both busy with their respective projects. Blunt is still filming for "Mary Poppins" while "The Office" actor is expected to appear in a movie about the Detroit riots directed by Kathryn Bigelow, who is the woman behind "The Hurt Locker." 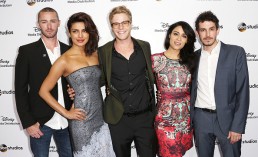