Amber Portwood is so happy with her new boyfriend, Andrew Glennon.

Following a troubled relationship with Matt Baier, the Teen Mom OG star began dating Glennon, who also works in television, and during a new interview, she opened up about their new romance.

“We're going slow and we're just trying to be smart about everything, which is good to find somebody on your level like that,” Portwood told Us Weekly magazine. "I think we just kind of fell into this groove of really enjoying life with each other for a while, so it's kind of fun and it's kind of serious in a way as well, but we're trying not to put too much pressure on a relationship.”

While Glennon currently resides in Malibu, California, as Portwood remains in Indiana, their long-distance relationship is working just fine.

“It's been good because we can give each other space,” she shared. "It balances everything out especially when you first break up with somebody. You don't really want to jump right in to another situation, but, you know, some men are worth it, some aren’t. He's definitely worth my time.”

Also during the interview, Portwood confirmed that she and Glennon will be attending the MTV VIdeo Music Awards on Sunday together and revealed that Glennon had already begun filming Teen Mom OG season seven.

"Andrew will be on Teen Mom OG! Yes! We've only filmed one time,” she revealed. “I think the reason why we are where we're at right now is because we both have kind of let it flow and then it became more serious and then we became committed.”

No word yet on when Teen Mom OG season seven will begin airing on MTV. 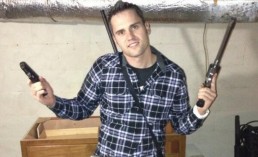 Kourtney Kardashian Boyfriend: Scott Disick Trying To Get Her Back? [VIDEO]