Apple just announced one of its major products at the new Steve Jobs Theater and this device is called the Apple Watch Series 3. With this, it was reported that this product will feature a better processor, a cellular connectivity because of its embedded SIM card, plus a swim proof body.

According to The Next Web, this Apple Watch Series 3 can be used without the phone in order to receive notifications, monitor heart rate, receive calls, and stream music. The key innovation which Apple thought that they will be incorporating in this device is its cellular connectivity.

When it come sot its battery life, the Apple Watch Series 3 reportedly manages a full day on a single charge. But if this device will not be one's primary and essential tool, this feature and specification will not be that too much of a concern. But ideally, Apple reported that the battery of this device should last long enough that even if the user forgets to charge it every day, it will not be a hinder.

Because of its better battery performance, the Apple Watch Series 3 is said to be very different from the now-defunct Pebbles and the What? Calendar Watch which also can last several weeks on a charge. Even if it has a cellular connection, the new device launched by Apple must be able to help the user leave the house when he wants to.

With the new Apple Watch Series 3, the users hope to be more discreet wearing a smartwatch whenever they are out of the house. Sometimes, it will be unusual for the user to feel a little different when his watch vibrates a hundred of times to alert him of new messages and email most especially if this tool is the best device in replying to them.

Apart from this Apple Watch Series 3, the company is reportedly launching its iPhone 8, newest from its iPhone series. Reports added that this device will have the upgraded facial recognition which is not found in their other units and models. 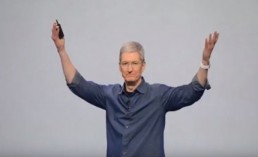