As we prepare for a new month, we also have a plethora of films to look forward to! So far, 2018 will probably produce some record-breaking films, such as Black Panther, Avengers: Infinity Wars, Ready Player One, and A Wrinkle in Time.

While it may be a little while until some of these films hit the big screen, we are fortunate enough to have teasers and trailers to hold us over.

Check out some of the best trailers for the upcoming 2018 films!

The finale film from the worldwide phenomenon based on the hit book series will premiere in theaters on Feb. 9, 2018. The movie will pick up from where the second left off and focus on the married life of Christian and Anastasia "Ana" Steel, who will have to deal with a spurned ex-lover, a vengeful ex-boss, and an unexpected pregnancy.

Steven Spielberg's adaption of the critically acclaimed novel will premiere on Mar. 29, 2018. Ready Player One follows teenage Wade Watts (Tye Sheridan) who is on a quest to become the new owner of OASIS, a company that created virtual reality games.

Reese Witherspoon, Oprah Winfrey, Mindy Kalling, and Chris Pine will take audiences on a mind-bending ride in the Disney film, A Wrinkle in Time. The film, which is based on the best-selling book, will follow young Meg Murry's (Storm Reid) quest to find her missing father who is being held captive on a distant planet.

It's the beginning of the end as the Avengers prepare for an ultimate battle against the Galaxy's most powerful, evil villain. The Avengers: Infinity War will hit the theaters on May 4, and will follow the now broken team who will have to stop Thanos from retrieving all the infinity stones.

Meryl Streep and Amanda Seyfried are back as everyone's favorite mother-daughter duo in the sequel to the musical comedy, Mamma Mia. The second film will show Sophie (Seyfried) trying to establish a life of her own, but will she be successful without her mother's help? Actress Lily James will also be in the film as the younger version of Donna (Streep).

Natalie Portman leads this female ensemble cast in the upcoming fantasy-horror film, Annihilation. Portman's character, Lena, is the wife of a solider (Oscar Issac) that returns from a mission which leaves him gravely ill. Lena sets out with a group of scientists that explores an environmental disaster zone and discovers what happened to her husband and his deceased team.

Another well anticipated film of 2018 is Marvel's Black Panther fillm, which debuts on Feb. 15, 2018. The film will follow the now-king, T'Challa, of Wakanda who will have to defend his land against two enemies that seek the throne.

The latest stop-motion animation film will take place in the beginning of time, before I-Phones and MacBooks were created. Early Man will feature the voice talents of Eddie Redmayne, Maisie Williams, and Tom Hiddleston. Redmayne plays Dug, a caveman who is determined to save his village from the impending Bronze Age City.

John Boyega may be the next big action star. After reprising his role in the latest Star Wars Film, Boyega will be featured in Pacific Rim: Uprising. The movie takes place ten years after its predecessor where Jake Pentecost (Boyega) will lead a new army of young fighters that will fight to save humanity from extinction.

Alicia Vikander is the next tomb raider. The actress will be taking on the role of Lara Croft in the 2018 Tomb Raider film. The movie will show Croft's beginnings as a young adventurer that sets off to finish her late father's last mission. 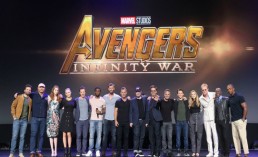