Carrie Fisher won her first-ever Grammy Award on Jan. 28, nabbing the trophy for Best Spoken Word Album for her voiceover work on The Princess Diarist.

The Star Wars actor, who passed away in December 2016 at the age of 60, was posthumously given the award for her audiobook recording of the aforementioned title, a memoir that recounts Fisher's experiences during the filming of the Star Wars.

The competition was stiff. Fisher beat Neil deGrasse Tyson (Astrophysics For People in a Hurry), Shelly Peiken (Confessions of a Serial Songwriter), Bruce Springsteen (Born to Run), and Bernie Sanders and Mark Ruffalo (Our Revolution: A Future to Believe In) in the category. This is Fisher's second time to be nominated, the first one was for her 2009 memoir Wishful Drinking.

Fisher most recently starred in Star Wars: The Last Jedi, reprising her role as Princess Leia Organa. It, along with forthcoming film Wonderwall, was one of the last films she appeared in. Fisher passed away during the production of The Last Jedi. From 2015 to 2017, she also portrayed the character of Mia Norris on the hit Channel 4 show Catastrophe.

The Princess Diarist was published just weeks before her death, and it made headlines for the details it revealed, including a brief affair with Harrison Ford, who portrayed Han Solo in the films. Fisher was returning from a European leg of a book tour for the memoir when she suffered a heart attack on a flight home to Los Angeles. She passed away days later.

This isn't Fisher's first nomination since her death, however, as the actor has been reaping a handful of other nods in recent months. For instance, she was nominated for an Emmy Award for her performance in Catastrophe. But the Grammy award marks her first posthumous win.

An excerpt from The Princess Diarist is available below:

"George Lucas held his auditions for Star Wars in an office on a lot in Hollywood. It was in one of those faux-Spanish cream-colored buildings from the thirties with dark orange-tiled roofs and black-iron-grated windows, lined with sidewalks in turn lined with trees — pine trees, I think they were, the sort that shed their needles generously onto the street below — and interrupted by parched patches of once-green lawns.

Everything was a little worse for the wear, but good things would happen in these buildings. Lives would be led, businesses would prosper, and men would attend meetings — hopeful meetings, meetings where big plans were made and ideas were proposed. But of all the meetings that had ever been held in that particular office, none of them could compare in world impact with the casting calls for the Star Wars movie."

Thoughts about The Princess Diarist? Thrilled about Fisher's posthumous Grammy award? As always, if you have anything to share, feel free to sound off in the comments section below! 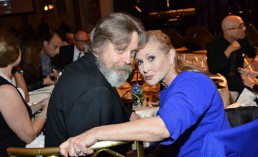 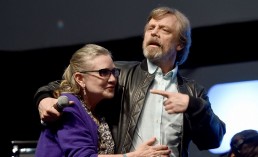 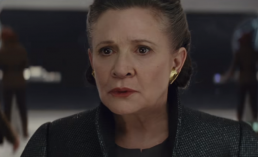